Foolz and I took a day trip yesterday (Sunday) to Santos, a beach town about an hour outside of São Paulo. We took a bus, it was easy as pie and only $7 US each way. Santos, it turns out, is like the opposite of São Paulo -- it is simple, small, and quite beautiful. It is sort of a delapidated little city -- it kinda reminded me of Valparaíso in Chile, and a little bit of Havana as well. There was a lot of peeling colonial architecture and tight streets, which gave me deja-vu of Centro Habana.

Anyway, it was raining the whole day, so we just ate lunch in a cutesy Italian place that was showing "Home Alone 2" on TV, walked around a bit, looked at the beach (which had a lot of potential, if the weather had been nice), then got on a public bus that just happened to go everywhere in the city, including the creepy shipyards and loading docks that cover like 1/4 of the town. Overall, a nice day, and very nice to get out of the city. I love São Paulo like a brother and all, but it's good to change things up every once in a while.

This is the official Santos website: http://www.santosbrasil.com.br/ If you click on it, you'll see that the city focuses on shipping. And boy, do they have some shipyards there. I am telling you.
Posted by Steph at 9:37 PM No comments: 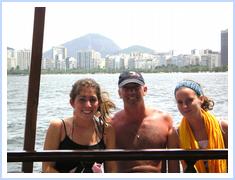 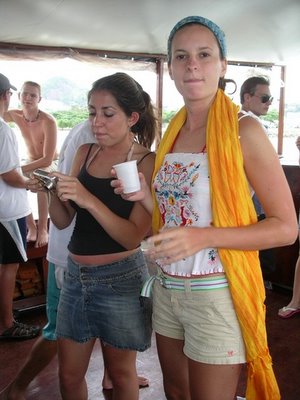 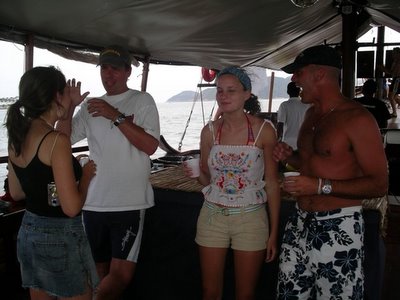 My email describing my Thanksgiving trip to Wee-oh:

It's been, what, WEEKS since I last regaled you with tales from the southern hemisphere... since I took a week off work for vacay in Rio, I might as well fill you all in on that trip. Let me just start with last Friday (not the movie!!!!) and go from there.

Last Friday, Clifford Chance hosted something called a Latin America Alumni dinner, supposedly for people who had at one point worked for Clifford Chance in São Paulo, and for other people from the New York office who seemed to have little or no connection to Latin America whatsoever. It was held at Figueira Baby Beef Rubiyat, which is supposed to be "the best restaurant in São Paulo..." That is quite a claim, seeing as I think every kiosk selling fried balls of dough in this city is the best food I have ever had in my life. It was a bit unclear whether I was actually invited to this dinner, since I received an email invite at one point, and then was verbally disinvited by Stephen, the partner, then RE-invited like 15 minutes later by the same. But I showed up anyway, with Julia in tow. We got there just in time for cocktails and peanuts, then were whisked to a lavish and delicious dinner with centerpieces made out of flat bread and topiary constructed out of parsley and stuff. Since this was a hob-nobbing, socializing-with-bigwigs type function for me, I wanted to impress, especially because I was seated next to one of the new partners in the firm. So, I made sure to spill red wine all over the table and on my white pants, make a scene, then spend a good 20 minutes scrubbing ineffectively at my crotch with a brush and some white powder, while muttering obscenities under my breath. I also used that time-tested remedy of dumping loads of sparkling water into my lap, because that worked so well the last time I emptied a glass of wine onto my white pants at a nice dinner in South America (Bing Dinner, 2003, Santiago, Chile).

Soooo, that was embarrassing, but pretty soon everyone was drunk so it didn't matter. Afterwards, all the old fogies wanted to go clubbing, but mercifully that (clearly ill-fated) plan ended up getting vetoed, and Julia and I ended up with two partners from the NY office, Jaime, and two other NY lawyers at a bar in this super swanky hotel near the restaurant. THEN, somehow, it was 4 am and I still hadn't packed for Rio... uhhhh... so when the cab driver called at 4:40 to take us to the bus station, neither of us were feeling on the tip top of our game, but we sucked it up and got on the bus.

So, we started off our trip in Rio sort of on the hungover foot, but things got better. We stayed at the new-and-improved Che Lagarto hostel in Ipanema, which now sports marble floors, air conditioning (!!!!), bathrooms for each room, a bar (the cleverly named "Bar Code") and a "chill-out room," which was always deserted, even though Julia and I dutifully checked it out every day for signs of chillage-outtage. Foolz and I were determined that this time in Rio, we were going to partake in activities other than drinking rum and going shopping (not simulataneously, those were two separate and equally demanding activities for us two years ago). In the spirit of adventure, we signed up to go on a "boat party," knowing only that there would be a boat, free food, and possibly other people. Turns out there WERE other people, a boatload (har har) from two other hostels in Rio, the seedier Che Lagarto Copacabana and the Mello-Yello. We quickly made friends with all the desirable males on the boat, ate lots of sandwiches and little hot dogs, and danced to "pump up the jam." It was so fun!!

Some of the kids we met on the boat were American and we ended up meeting up with them later for Thanksgiving and stuff. It was great. I also befriended some English blokes from Southhampton, one of whom was covered in a layer of sunscreen so thick you could only see his eyes. Do bottles of sunscreen in the UK not advise people to rub it in, or is this an English fashion statement, or what? I'm just wondering. By the way, I am allowed to say that now since I am employed by a British corporation -- I practically have dual citizenship. Anyway the guys were cool -- well, not really, but one of them was hot -- and we ended up meeting up with them later too. I'll get to that.

On our fourth day there, Pat (Julia's namorado from Nova Iorque) showed up and we upgraded to the Atlantis Hotel in Copacabana. There were some minor plumbing issues (like when I turned on the sink and water started shooting out of a pipe in the floor) but it was very nice, plus we got to catch America's Next Top Model, so it was totes worth it. With Pat, we did some real sightseeing -- we went to the Cristo statue, which was really impressive, and also embarked on a long and circuitious journey to the Vista Chinesa ('the Chinese view') that my friend Mariana had recommended. I think we saw every inch of jungle that Rio has to offer on our way to this vista...at one point I was pretty sure we were going to get eaten by those creepy little monkeys with the pug faces that were watching our cab hungrily from the trees. But, afte r an hour of aimless driving, we got there, took a few pictures, and left. Sightseeing in a nutshell. We also ate at two churrascarias, one of them on Thanksgiving night -- delicious -- and partook in some "local cuisine." At one place, Pat ordered chicken and rice and ended up with chicken HEARTS AND LIVERS and rice. I, like a damned fool, ate some of it. God only knows what kind of innards-born bird flu strains I exposed myself to, but, whatevz, a girl's gotta eat.

On our last night in Rio, we went to Lapa (scene of the Alex 'Rats 'n Cats' Bleyleben comment, "what, one gunshot and you guys get scared?") with some Americans and met up with the British lads -- sunscreen boy, some kid who looked like a plump version of Jamie Oliver, and Steve, who had dazzling green eyes. DAZZLING. I tried to stare into those eyes and block out the majority of what Steve and his mates said, because it was about 90% moronic and foul, but it didn't really work...they ended up coming with us to a club in a strip mall somewhere but then Steve couldn't get in because he was wearing flip flops (and $300 diesel jeans, as he pointed out). I was like, OK, see ya! and went in. I felt bad the next morning when he called to apologize for not getting in and said he tried to go back and "put on some trainers," but by then it was too late. Awwww, I love British people. I am allowed to say that, too, since i am like half British now.

Sooooo, that was Rio, in brief. We came back Saturday evening, went to a decidedly non-lively party, then spent Sunday looking around São Paulo. We went to brunch in Moema, to the Parque Ibirapuera, on to Liberdade (Asian section of town) to peruse the extensive Hello Kitty jewelry and incense selections, then to Centro, for another market. I got some "real Chanel" sunglasses for US $10. Chanel pastes on their logo sort of sideways, right? Right?? Isn't that how you know it's real?... anyway, after that we went back to Moema, rested, then went to the Unique (where else) for drinks. I love the Unique and I LOVE those Japanese peanuts they serve. I could eat those all night.

So now I am back at work, and seeing as I just took a good half hour to write this email, it's safe to say that I have nothing to do. Foolz and Pat are in Buenos for this week, then F. is coming back to SP for another (final) week. I am already missing her -- I have gotten used to having a roommate. We're practically married now -- we sleep in a double bed with matching endtables and do crosswords together on the couch at night. I make dinner, she does the groceries. I am definitely the breadwinner in the relationship, although she does have her adorable "volunteer work."

Well I think this email might be violating some sort of law for being too long and in a cutesy font, so I am going to stop. Write back soon you pug-faced monkeys!!