Never have I had a BAD Thanksgiving. The only Thanksgiving that I can remember even coming close to being "bad" was during my freshman year of high school -- I had just gotten my wisdom teeth out a few days before and could only eat mashed potatoes, which, in retrospect, wasn't that bad at all. I guess I could have eaten the cranberry sauce, but I'd rather go hungry than eat gelatinous, pink goop that comes out of a can.

This Thanksgiving was excellent, as usual. Thirty people or so showed up to my grandparents' house to gorge on bean salad, two kinds of stuffing, turkey, ham, taters, asparagus, salad, brownies, three kinds of regular pie, and two beautiful ice-cream pies made by my cousin. Jamoca Almond Fudge ice cream pie = major perk of having a relative who works at Baskin-Robbins.

As at all of our family gatherings, someone cried, but that is par for the course. No biggie. Overall, there was minimal drama, minimal stress (at least for me, since the most stressful part of my "duties" was going to Andronico's market to stock up on cheese, crackers, and wine), and minimal yuckiness. Below is a picture of me and some of my cousins with Pop, our grandfather. We were all pretty deep into the turkey coma at this point, as you can tell from the blissful/dazed facial expressions. Mmmmm. 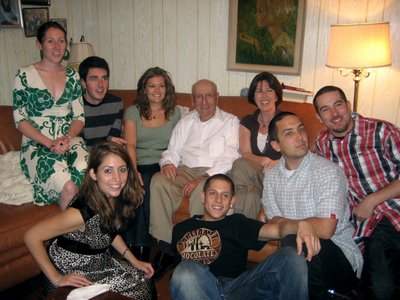 I think Thanksgiving is one of the greatest things about America. Besides the fact that it involves vast quantities of some of my favorite foods -- turkey, pie, biscuits, pie, wine, pie -- it has a nice story behind it about Pilgrims and Indians and sharing the horn of plenty. I think there must be some truth to that story, because somehow those settlers did get through the brutal New England winter (cough) and learned how to cook a mean bird in the process. Every American who has ever eaten themselves into a trytophane-soaked stupor owes a great debt to those Native Americans who shared their wisdom with those hapless Puritans.

Another great thing about Thanksgiving is that even if there is no turkey immediately available, the spirit of Thanksgiving inspires Americans to give thanks -- and pig out on whatever happens to be at hand. I have celebrated two Thanksgivings in South America, which is generally a turkey-free zone, but Thanksgiving found a way to happen anyway.

In 2003, seven of my friends and I found ourselves in Rio on Thanksgiving evening, and started drinking rum and cokes as soon as we got off the plane. Later, in the middle of a thumping, sweaty club, someone yelled out, "HEY GUYS! It's 1 am and we haven't eaten Thanksgiving dinner!!!" Next thing we knew, we were sitting in a brightly lit restaurant eating pizza with a ketchup-esque sauce and toasting that greatest of American holidays. The picture below is Thanksgiving night BEFORE the madness happened. 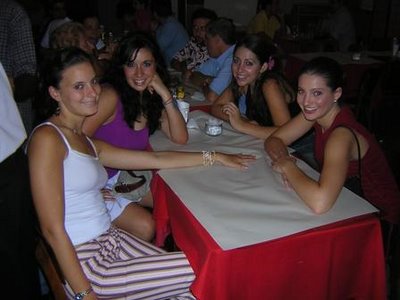 I spent last Thanksgiving in Rio, too, with Hoolia. We met some Americans and headed out to a churrascaria with the goal of eating ourselves silly on meat, just to get that wonderful Thanksgiving stuffed-to-the-gills feeling. It worked pretty well. There's also something special about eating Thanksgiving dinner with flip flops on.

Enough reminiscing --- thank God for Thanksgiving!
Posted by Steph at 2:14 AM No comments:

The case Fuller v. Illinois Central RR (Miss 1911), mentions the impact of the case of Davies v. Mann, in which plaintiff fettered his donkey on a public highway, only to have the donkey run over by defendant's wagon. The donkey died. The Fuller court described it this way:

The groans, ineffably and mournfully sad, of Davies' dying donkey, have resounded around the earth. The last lingering gaze from the soft, mild eyes of this docile aimal, like the last parting sunbeams of the softest day in spring, has appealed to and touched the hearts of men. There has girdled the globe a band of sympathy for Davies' immortal "critter." Its ghost, like Banquo's ghost, will not go down for the behest of the people who are charged with inflicting injuries, nor can its groanings be silenced by the rantings and excoriations of carping critics.

Reaching out and reaching in

The other night in my balletone class (don't ask), during our "cool down," the instructor put on some Sarah McLachlan as we were stretching and I almost got all misty-eyed. Sarah has a big effect on me sometimes... I get all nostalgic when I sit down and really listen to it, because her music sort of defined my life in high school. Not the lyrics, of course, since they are borderline inscrutable and most definitely lovey-dovey, but just the presence of the music itself.

I listened to her music after cross-country practice every day for four years, usually while I was spread out on my floor in front of my CD player. I listened to Sarah in the car while driving to school. I listened to her while studying. I even went to Lillith Fair one year (with our unappreciative Argentine exchange student), and was enraptured for Sarah's entire performance, even when two lesbians spilled beer on my blanket. (They offered to buy me another one, but I said no since I was driving. And sixteen.)

The first time I heard Sarah McLachlan was at cross-country camp, the summer going into my freshman year of high school, almost TEN years ago. Whoa. After our grueling morning workout, we used to come back to the cabin and pop on Surfacing while we took our nap before the afternoon workout. "It's good sleeping music," said one of my teammates. And it was.

About a week after camp ended, I went to the mall and bought Surfacing. The girl behind the counter said, "Oh my God, isn't this album great? I love Sarah McLachlan." I took that CD home and listened to it on repeat throughout that entire cross-country season. My favorite song was "Adia," but I loved all of the songs on that album, even "Last Dance," which my cousin Megan lovingly refers to as the Sad Drunken Clown Song.

I maintained my devotion to Sarah throughout high school. I bought all of her albums and listened to them religiously. When my dad bought me tickets to Lillith Fair, I freaked. The concert was Meadowbrook, a big outdoor ampitheater. I was forced to bring our surly exchange student, who had NO appreciation for the event, of course. Ingrate. We sat impatiently through Queen Latifah, the Dixie Chicks, and Martina McBride before Sarah took the stage. Totally worth the wait. She was incredible.

Throughout college and up to today, I never stopped listening to Sarah, but for some reason, when my balletone instructor put on "Hold On" during our calf stretches the other night, it made me realize anew how great Sarah McLachlan really is. I even like her weird, wail-y songs, and her hazy, strange lyrics. I love her, plain and simple.
Posted by Steph at 1:47 AM No comments:

Reflections on Birthdays and Halloweens

I have been lucky enough over the past 4 years to have celebrated my birthday (AND Halloween) in three different countries. I thought I'd reflect a bit on a few of these celebrations -- the highs, the lows, the weirdnesses.

This birthday involved the infamous Bellavista chair incident, in which, as I was talking loudly and enthusiastically to all of my friends at an outside bar in the funky Bellavista barrio, I went to sit down in a chair and TOTALLY missed, thus crashing onto the ground mid-sentence. Awww, yeah. Other highlights of this bday included: manjar cake, dinner at Como Agua Para Chocolate (fancy Mexican restaurant), drinking pisco out of a Coca Lite bottle on the metro, the series finale of Machos (!!!), and having a joint bday celebration with VanTasma and Sam.

I think my myspace blog entry from my birthday last year says a lot. Here it is:

it's my birthday today, yippee hooray! i got to go to a talk on the sarbanes oxley act in the morning -- happy birthday to me. at least there was cake at the lunch so i felt somewhat validated as the bday girl... tonight the plan is sushi and clubbing at Asia 70. yaaay!

The fact that I was in a "cheerful" mood about attending a talk on the freaking Sarbanes Oxley act (in Portuguese, by the by) on my birthday really speaks loudly about how FUN my job was. Anyway, that birthday actually improved a lot after the conference ended. I went out to sushi at a restaurant/club called Asia 70, and aside from the fact that I sat alone at the table for an hour before any of my guests showed up (yay for Brazilian sense of time, which apparently all of my British friends adopted as well), the night turned out to be really fun/crazy.

Halloween in Brazil apparently does not exist. That's all.

Awesomely fun. This birthday also involved sushi, at a super nice place in Boston, and lots of wine. One of the best parts of the bday was that Karen was here, so we had a blast, obviously. After dinner, a bunch of my Harvard friends joined me at Gypsy Bar, where we shook our booties till it shut down. Man, what a night.

Just to let you all know, the totally 80's Jem costume idea turned out better than I could have hoped. Thanks to neon hair extensions, blow-up guitars, leg-warmers, and some BRIGHT blue eye-shadow (designed to stand out on African-American skin, which means it really popped on our pasty faces), my girl friends and I successfully tranformed ourselves into JEM AND THE HOLO-FITS. Please see picture: 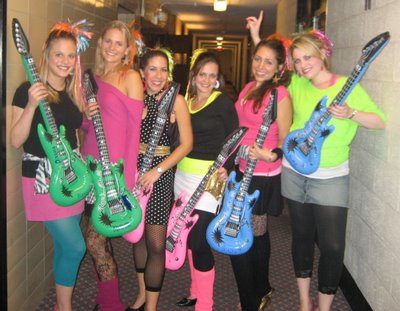 That picture pretty much says it all.

One more note about Halloween at Harvard: today my crim law professor, Prof. Weinreb, dressed up as a bum. This was hilarious because:

1. Prof Weinreb normally wears a suit and tie to class every day.

2. Prof. Weinreb looks like this in every day life: http://www.law.harvard.edu/faculty/directory/facdir.php?id=85

2. He showed up wearing a backwards baseball cap, dirty jeans, a flannel shirt, and dirt all over his face.

3. He made no mention of the fact that he was dressed up as a bum and conducted class as usual.

Maybe this is only funny to people in my class, but it certainly made my morning.
Posted by Steph at 1:14 AM No comments: