We've all been there. A song that once brought you great joy is subsequently ruined by a breakup or some other unpleasant change in circumstance. As in, "I can never listen to Vitamin C's "Graduation Song" again -- that bastard ruined it for me forever." It sucks because songs that are actually really good and probably have multiple memories attached to them, some of which are no doubt untainted, are permanently ruined and officially unlistenable, ever again. Dang.

Anyway this website lets people write essays about songs that are now ruined for them, thanks to unrequited crushes went awry, nasty breakups, and the like:

Enjoy. Or don't. It might still be too painful to pop in "I'm All Out of Love" after everything you've been through. Give it time.
Posted by Steph at 6:36 PM No comments:

Everything's thawing. Melting. It is glorious.

Finally, the temperature has gone from being subarctic to a balmy 40 some degrees. I felt like slapping on my bikini as soon as the thermometer hit 40. This is a new low for me.

There are so many beautiful things happening outside: the ice melting into sludge and the snow bleeding into slush, the cars splashing through the sludgity-slush lining the streets. It's downright spring-like, which has inspired me into a rebirth of my own. Well, that, and it's Lent and I am renewing my yearly Lenten promise to be the Best Person in the World, so there's a lot of inspiration in the air.

For instance, I started doing yoga again. And by "started doing yoga again," I mean I have gone to one yoga class at the gym, but hey, it's a start. I haven't done yoga regularly since I graduated college and miss it. I miss being able to contort myself into weird shapes and balance at precarious angles, but most of all I miss the part at the end where you lie on your back and get to take a five minute nap. Don't tell me anyone in the room actually uses that period to "meditate" after a 90-minute power yoga class -- that's a nap and let's not pretend otherwise.

Also in this period of rebirth and reflection, I couldn't help but think back to where I was at this time last year. Devotees will recall that I was in Salvador, Bahia for Carnaval with my slightly (i.e. majorly) unbalanced amigo D. To think that last year I was wandering the beer can-littered streets of Salvador in the wee hours, desperately searching for a bathroom and ending up popping into a brothel to pee, then wading through a sea of people to attempt to find a cab back, failing, and walking the 6 kilometers back to our hotel on aching feet --- it's extremely surreal.

At this time last year, I spent my days in Salvador doing the following: sitting on the tiny sliver of beach by our hotel being harrassed by guys selling cheese kebobs, sandals, flags, and sunscreen; drinking Skol beer and diet cokes; eating fried yucca and big Spanish tortillas from the place down the street; listening to the trio eletricos testing their sound systems outside our hotel door; reading Brazilian women's magazines on the sand; eating excessive amounts of chocolate; slowly but surely learning the words to every Chiclete com Banana song; running through litter-cluttered streets and pulsating heat; looking disapprovingly at sunburnt gringoes acting like big loud idiots; looking quite approvingly at the Brazilians with camelBak backpacks filled with alcohol; attempting, always, to be invited on top of the trio eletrico. Man, I wanted to be one of the girls on top of the trio...

I'll end this surreal flashback and wish all of you a happy Carnaval, happy Lent, happy thawing, and very happy yoga nap.
Posted by Steph at 8:52 PM No comments:

To prove that I wasn't making it up about the neon tube light leaning in a corner at the MOMA, please see the picture below: 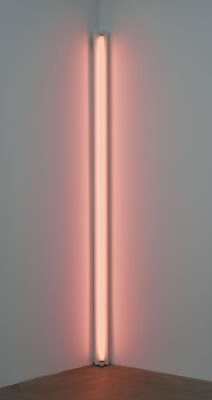 Yep, that pretty much about sums it up.

I'm sure some of you are reading this and thinking, "That Stephanie really is an ignorant f*** Anyone who can't appreciate the intense feeling and metaphorical power of a pink light leaning in a corner, deprived of all context, depending solely on its own bright, pink light for identity and meaning, just as the artist relied on his own staggering genius in order to finagle a tube light into the MOMA, obviously doesn't know art and is just jealous she didn't think of it first."

I am going to enroll in an art appreciation course immediately.
Posted by Steph at 5:57 PM No comments:

I really have been terrible at blogging lately. Here are the things I have meant to write about and haven't:

1. Cuba, but mainly how I think Fidel is really dead, and has been since the end of October. Seriously. Those pics of him and Hugo aren't fooling anyone.
2. Cuban cheese
3. Buenos Aires and how I might work there this summer
4. Other important, non-Cuba and non-Latin America related topics that aren't springing to mind at the moment

None of these things got written about, obviously, but since I'm in New York visiting Hoolia, I might as well write about that, right? I was here last weekend too, for the twins' birthday, which was really fun, obviously. So much fun, in fact, that I decided to come back this weekend since our semester is still at the point where I can get away with doing absolutely no schoolwork for an entire weekend. Well, actually, the semester has never been like that, but I do it anyway.

I drove up here on Friday with my law school friend Karen, and given that I had abused myself on Thursday night by going to a boozy firm reception and then dancing my butt off at bar review, I was not prepared to go out on the town in New York on Friday night. So Julia and I had her friend from CNN over, and we watched Season 3 of Arrested Development, which sent Julia and I into hysterics and left her friend rather unimpressed. (Best part of the entire season? "Mock Trial with J. Reinhold," featuring William Hung and his Hung Jury. If you're not an Arrested Development fan, please become one immediately.)

On Saturday, I went running along the river. It was chilly but rewarding because there were so many cute guys out running on that river. It was like a running-shoe modeling casting call or something -- very inspiring. I came back and showered and Hoolia and I decided to do something cultural for a change and go to the MOMA. On the way there we stopped at a deli for sandwiches and drinks, and somehow I managed to lose all circulation in my hands while drinking my bottle of diet coke (it was icy!!!) and thus spent the entire subway ride to the MOMA with my fingers stuck under my armpit, trying to regain color and feeling. People stared.

The MOMA was great because Julia (plus four guests) get in for free with her corporate pass, so I saved $$$ and got to see great art. Well, some great art, and some large canvases painted black, and of course, some neon tube lights. That's right, neon tube lights. There was one "piece" that was a pink tube of neon light in the corner of a room. People were standing in front of it listening to audio commentary on the artist's inspiration and technique, and I was barely resisting the urge to snatch those audio things out of their hands and yell, "IT'S JUST A PINK LIGHT, YOU PINHEADS!" But I didn't, because clearly I am just an ignorant f*** who does not appreciate great art. And, as Julia pointed out, I am just jealous that I didn't think of it first.

Neon lights aside, there were some great pieces of art there: Van Gogh's "Starry Night," for example, and tons of Picasso, Monet, Seurrat (love that pointillism), Warhol (love those soup cans), Rousseau, O'Keefe, and on and on. I guess the least inspiring part of the whole museum was the "Architecture and Furniture" section, which was mainly beat up couches and desk lamps sitting around. People seemed very impressed. I wasn't.

After all of our art-viewing, we were tired -- it's hard being so culturally engaged -- so we came back to the apartment and watched "The White Rapper Show" for a while. I pretended to do research for school for like 10 minutes but ended up researching restaurants for us to go to that night. We went to a Venezuelan place called El Cocotero, which had delicious food, including yuca frita, one of my favorite things in the world. Yum. Afterwards we went to a Stanford party, where I somehow ran into a friend who I met at camp in Kentucky when I was 17. So THAT was weird. Smalllll world.

Now I'm about to go back to Cambridge, which is not exciting. Back to reality.
Posted by Steph at 2:28 PM No comments: