The other day, I had the unique experience of attending the Dickens Fair(e) at the Cow Palace with my cousins Amanda and John. "What is the Dickens Faire?" you may be asking. Well, it's pretty much exactly what it sounds like: a fair celebrating the works of Charles Dickens. Except not really. Because really, the Dickens Faire is a renaissance/medieval fair for those who wish they could wear corsets, speak in a strained Cockney accent, and drink mead every day, but can't because of societal constraints. For instance, once inside the Cow Palace, I saw, among others: a rough looking chimney sweep with ash and grease all over his face,* a six year old slutty pirate wench, a constable chasing a drunk, and several singing prostitutes.

Initially, I was confused as to what the point of the Dickens Faire was, but now, well...still kinda confused. I mean, there are "shops" where you can buy such practical items as corsets, wooden boxes, assorted spices, hair garlands, and mystical goddess paraphenalia (which was obviously super popular in the Victorian Age), and there were shows happening on various stages, but there was no main(e) event. I suppose the main event for me was probably ye olde pub, where I ordered a hot cider with rum. Yum.

After my cousin John and I got our drinks and Amanda bought some nuts in a paper cone, we went to look for Amanda's friend from work, a performer at the Faire who was the impetus for Amanda's suggestion that we go in the first place. We found her eventually (she was dressed as a singing whore) and she greeted us. The conversation went like this:

Amanda: So, um. Are you having fun?

SWF: Great fun, sweet 'eart! I'm just tickled you could come! Why don't you 'ave a seat righ' over there and watch the show?

We took Amanda's friend's advice and sat by the stage and watched a burlesque show unfold, which involved a fat lady with truly scary cleavage singing a song with a cucumber as a prop. Gross. And there were children in the audience! Kids grow up too fast in ye olde England, I think. After the show ended, we took another spin around the shops, gazed longingly at the meat pies being sold in the back, and then left because Amanda's eyes were red and watery. Her Dickens allergy really acts up this time of year.

Anyway, if you want the official line on the Dickens Faire, check out this link: http://www.dickensfair.com/

Judge for yourself. Cheerio!

*Also could have been a modern day homeless person.
Posted by Steph at 10:07 PM No comments:

Spinning 'round the world

I came to the realization today that I have done indoor cycling in four countries, in three languages. Not to brag or anything, but yeah, I know...pretty big accomplishment. Now ask me how many museums I have been to in various countries. Ummm....

Actually, spinning varies a lot from place to place, I've found. In Brazil, it's all about the bells and whistles. And the techno. The incessant, horrible techno. (http://teffsinbrasil.blogspot.com/2005/08/living-top-life.html)* In Argentina, it's about harsh criticism and jutting collarbones. In Chile, it's about getting your ass kicked in a bright room. In the U.S., at least at the Harvard Law gym, it's about old people yelling out stuff and stirring up pointless competition with the other people in the room who also are on bikes that aren't actually going anywhere.

I have sort of a love-hate relationship with my spinning class here. Part of it is in my own fault -- I go to 7:15 AM spinning on Monday, Wednesday, and sometimes Friday. That time slot alone is going to guarantee a healthy percentage of psychos in any given exercise class. But the people who come to my spinning class bring things to an unexpected level of psychosis that is at once deeply pathetic and surprisingly irritating.

The class is made up of a hardcore group of "regulars," five or six of whom are in their mid-30s to late 40s, wear knee braces, give each other high-fives, and wear bandanas. They always sit in the back row of class and save each other bikes, even though that's not really necessary since they all tend to line up outside the spinning room at 6:50 before the instructor comes to unlock it.

At this point, you're probably thinking, "Okay, maybe they're just intense people and this is all they have, Stephanie. Maybe spinning is the bright spot on their otherwise empty and meaningless day and that's why they come to class half an hour early. Stop being such a judgmental b**** about it." Normally I'd probably agree with you -- and in a sense, I do believe that morning spinning is probably the highlight of each of these people's social lives. HOWEVER -- once class starts, whatever shred of empathy I had for them evaporates away, just as soon as the yelling starts.

The yelling? Oh yes -- the regulars are yellers. Sometimes they yell out actual words, like "LOVE IT," which is obviously an awful thing to yell out in any setting, but mostly they just make noises, like "WHOOooooP!" and "OOOweeee!" It's embarrassing. It makes me feel like I'm overhearing something shameful and sad. There's one middle aged lady who wears hoop earrings and chews gum the whole class who shrieks in a particularly grating way. There's another guy who ties a towel around his head and trash talks whatever row of bikes he's not in for the entire 55 minutes of class. ("That's the best you can do, front row? COME ON!")

Maybe the compassionate among you are still thinking, "That's not so bad. Those people are just expressing themselves. You know, the third rule of spinning is FUN, Stephanie. Why are you trying to begrudge them that, you hateful shrew?" My answer to you kind-hearted souls is -- because it's annoying as f***.

You see, when I'm trying to spin, which requires focusing, digging in, trying not to have a cardiac episode during particularly challenging "hills," the last thing I need to hear is "LOVE IT" or "WHOOOPPPP" or "BACK ROW KICKS ASS!" All I want to hear is the music. Oh, also, these people sing along to all the songs played in class, and one of them, the ringleader of the group, routinely requests a bizarre, hip-hop version of "Stayin' Alive" and then freaks out when it comes on.

Are you getting the picture here? At all?

Maybe some of you out there are big yellers and singers and trash talkers in spinning class, too. I know I won't get through to you, because you're insane. But for the rest of you, unless you're like me and can handle some serious, hardcore annoyance with your indoor cycling, don't drop into the 7:15 spin classes at Hemenway. Don't say I didn't warn you.

*Except for the one time my Brazilian spin instructor, Marcelo, played "Namibian Girl" every day for a week or so. That was weird.
Posted by Steph at 5:24 PM 2 comments:

I know this is sort of (really) old news, but can we talk about how disgustingly thin Carson Daly has become? Listen, Carson, it's okay not to be a size zero! 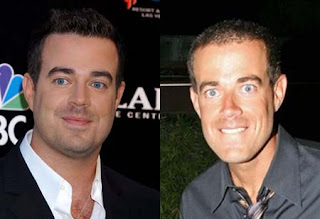 Hollywood puts SO much pressure on men to fit into those skinny jeans. Meanwhile Jennifer Love Hewitt can let herself completely balloon up to a size two and no one says ANYTHING about it.
Posted by Steph at 7:55 PM No comments:

Hi. I am trying to finish up my last final and it's hard -- not because I am stressed out, but because it's not due till the 19th (the day I leave for Christmas break) and without some sort of evil deadline hanging over my head, I have been content to write approximately 1 sentence per hour for like, two hours a day. Actually, let's be more realistic -- this is how the writing of this final has been progressing:

1. Write one sentence.
2. Stare out window.
3. Go on facebook -- switch off between my 13 active Scrabulous games and general stalking of various people who actually aren't that interesting.
4. Write another sentence.
5. Eat something chocolatey.
6. Go back on facebook.
7. Read Perez Hilton. Quietly mourn the passing of Ike Turner.
8. Back to facebook.
9. Shut down faceook in a burst of willpower.
10. Re-open facebook.
11. Contemplate writing another sentence.
12. Stare out window.
13. Eat something fatty.
14. Make a cup of tea.
15. Read old emails I have written to people and laugh at my own wit.
16. Write another sentence.
17. Turn on TV. Watch re-run of MTV's "Made: I want to be attractive!" Then get sucked into re-run of "Made: I want to be well-liked!"
18. Damn it. Facebook.
19. Cursorily read headlines of New York Times. Inevitably drift to the Style section. Read article about some, yet un-talked about aspect of bipolar disorder. Wonder who chooses what articles go in the Style section.
20. Google "who chooses articles in NYT Style Section."
21. End up on Wikipedia. (*Three hours pass*)
22. Back to facebook.
23. Write another sentence.
24. Notice that all my sentences start with the word "this." Change one to "the."
25. BREAK TIME.

I'm sure this paper will get done eventually. I just have to do it on my own time. Anyway, gotta go now, it's 7:54 and season finale of America's Next Top Model is coming on, so, you know. Bye.
Posted by Steph at 10:40 PM No comments:

Some people are men of few words. My dad is a man of few CDs. I am pretty sure his collection consists of the following artists: John Denver, Chicago, and Fleetwood Mac. I am with Dad all the way on the Chicago (not even Boyz II Men can do that band justice), but I will never understand the Fleetwood Mac thing.

First of all, what does Fleetwood Mac even mean? Oh, it's someone's name? Oh... okay, so that mystery's solved, I guess. But I have other, deeper issues with Fleetwood Mac. Like, if you're going to write a song with a big declaratory statement as the chorus, maybe you should make sure that the statement is actually true and not completely false. I am referring, of course, to the song "Dreams," and its insistence that "thunder only happens when it rains." No, it doesn't. Sometimes it thunders when it's not raining, and I resent them trying to tell me otherwise.

Third: if -- speaking hypothetically of course -- your name is Stephanie, why would you go by Stevie? Traitor.

So, as evidenced by the three aforementioned reasons, Fleetwood Mac is awful.