The title of this post is a sheepish apology!

I am apologizing because I have been SO bad with the blogging as of late. I have a couple of reasonably good excuses -- I was taking a winter term class, I went to Paris, I had an exam, and I am a lazy son of a gun.

Probably the best excuse for my bad blogging was my Paris excursion, which was totally, like, life-changing. I learned SO much about Europe after living there for a full three and a half days. Like, people in Europe all drive small cars because they love the Earth more than Americans. Everyone bikes to work, and school, and to the patisserie and the boulangerie and the pizzerie. That's another thing -- if you want to buy a croissant, you have to buy it at the bakery, but if you want a wheel of fromage, you have to get it from the cheese shop, and you have to carry it home in a cloth bag in the front basket of your bike.

European children also only play with locally-made wooden toys, and they each speak four languages, but not because their neurotic, competition-driven parents over-schedule them, but because in Europe, you just organically learn languages without even trying. I think it's because they don't put fluoride in the water. Damn you, fluoride!

Another thing about Europe: people are SO much more fashion forward. They wear tailored trench coats and scarves tied around the throat, and hairy shoes (see picture below). 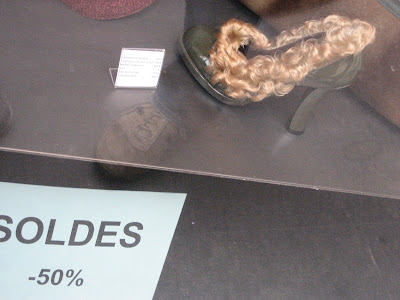 I don't expect you non-Europeans to understand this type of innate, superior fashion sense. Just trust me when I say that if you live in France as long as I have, you'll just get it. One day, it'll just make sense to you. That's when you know you've LIVED in Europe.

It was a big three days of self-discovery, I'll say that. Anyway, I am back now and ready to blog. Missed you guys.
Posted by Steph at 7:30 PM No comments: