I walked into Abercrombie & Fitch today and immediately regretted it. I was too self-conscious to turn around and walk out, because I felt like the smirking nineteen year old male model they hired to stand at the front door was judging me, so I did a quick lap through the dark and thumping recesses of A & F and departed, confirming for myself what I already knew.

1. I am too old to be stepping foot into Abercrombie & Fitch.

2. The music in that store is absurdly, stupidly loud.

Oh, but I remember the first time I shopped at an Abercrombie store. I was twelve, it was the summer between sixth and seventh grade, and I was in Baltimore. This was back in the day when the stores had plaid carpeting, bright lighting, and sold flannel shirts and tapered corduroys. I know this because I purchased several flannel shirts and a pair of tapered corduroys and was thrilled when a "cool" girl told me she liked my pants. Apparently I was not the only one in 1995 who thought ankle-pinching pants were awesome.

Then, sometime in high school, Abercrombie got wildly popular, and they started charging $15 for those big fat catalogs full of pictures of nearly naked white people. And with those ridiculously overpriced catalogs, the "Abercrombie model" look was born. According to these pictures, girls must be skinny with stringy hair and vacant eyes, with their shirts unbuttoned at all times. Also, girls usually only wear underpants, even outdoors. All guys must look like Olympic gymnasts in hemp necklaces. Guys are always wet and glistening -- maybe they just all went swimming? Again, at the time, this seemed cool.

When I was seventeen or so, I "dated" a guy who worked at Abercrombie and was in a frat at Michigan. Major cool points. He always wore a beaded necklace and dark-wash jeans, because apparently during that season at Abercrombie, light-wash jeans were verboten. I thought he was super cool, until he told me that he and all his co-workers used to steal bags of clothes after every inventory. But, to be fair, they did only give him a 20% discount. They were asking for it.

By the end of high school, though, I think it was widely understood that working at Abercrombie was actually not worth whatever limited social cachet you got for being attractive enough to get the job in the first place, because Abercrombie paid less than Burger King and forced you to wear their overpriced clothes from that season. And no light-wash jeans.

Anyway, the point is, I think I can't really allow myself to go in there anymore. I hate feeling old, and I also hate going deaf. It was nice while it lasted, Abercrombie.
Posted by Steph at 6:59 PM 1 comment: 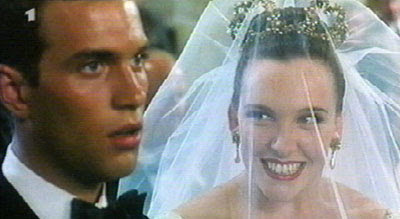 I'll just leave you with this final quote from Muriel: "When I lived in Porpoise Spit, I used to sit in my room for hours and listen to ABBA songs. But since I've met you and moved to Sydney, I haven't listened to one Abba song. That's because my life is as good as an Abba song. It's as good as Dancing Queen."
Posted by Steph at 9:32 PM No comments:

A tribute to TV

One of my favorite things to do is to go back through old emails I have written and received and look at my past through rose-colored glasses. "Those were the days!" I inevitably mutter, skipping over the parts of the emails where I bitch and moan about work, school, waiting in line, etc. I know it's a bit self-indulgent to re-read my own correspondence. Well aware.

Oh, are you expecting me to justify it somehow? Yeah, I've got nothing.

ANYWAY, I was going back through some emails from my time in Brazil and I came to the realization that, man, I talk about TV and movies a lot in my emails. Please observe the representative snippets below:

So far no rat-tail sightings but I have been watching Brazilian TV and there are some weird hair trends nonetheless. Like the other day on Brazil MTV they had this kind of makeover show where this kid gets to get a new image, etc., but they cut his hair in this horrible bowl/mushroom/shag thing, and at first I thought it was a joke, like Punk'd, "just kidding, now it's time for your REAL haircut," but no. They were serious.

And no, Flightplan hasn't come out here but wasn't there a movie exactly like that with Julianne Moore where she thinks she has a son and everyone tells her the son doesn't exist?? Is it just me or is Hollywood getting lazier!? The Julianne Moore one came out like last year.. are the Hollywood execs like, Eh, just get a new actress, make the son a daughter, and add in a plane, people won't notice it's the SAME MOVIE....

Last night I watched this really good documentary about "super gifted' children who were trying to get into a high school program called Transitions that lets them graduate h.s. when they are 14 and start college right afterwards. (i think it's insane, personally) Some of the kids chose to do it, and some didn't get in the program, and some chose to just go to regular high schools. Some of these kids just made me sad, bc the parents pushed them so hard and the children really were deprived of childhoods.. like this one Asian kid, his dad was totes living vicariously through him, and was coaching him before the interview for this transitions program.. and the dad said, "make sure you tell them that you are humorous. so if they ask you about yourself, what are you going to say?" and the kid said in this monotone, "i am humorous." SO SAD.

I had the WEIRDEST dream last night, where a bunch of people were sitting in a circle, including me and my mom, and Elton John and David Furnish.. Elton sat right in front of my mom, even though it was supposed to be a circle, and she was pissed. I think she said something sort of bitchy to him, and he replied bitchily, and I was like, Ma, you don't want to be on Elton John's black list, just let it go...*

America's Next Top Model is over and I missed the last episode, but Dougal explained it to me in detail. I guess Naima deserved to win but I was rooting for Kahlen. Naima was sort of a bitch when it came down to it.. but then I guess it's not about personality, it's about being FIERCE... right now American Idol is on, plus the usual favorites.. oh and a new season of Supernanny, which I can't get enough of. Oh yeah and I just realized a few weeks ago that they play Arrested Development on Saturdays on Fox... i LOVE that show, I think it is one of the funniest shows ever, like the kind of thing that I almost wet myself watching, even when I am by myself. Have you seen it?

The documentary last night was so weird. it was about BBWs (big beautiful women) and FAs (Fat admirers) -- there is this group of men who honestly like women morbidly obese. this one british guy dated obese women in the US and Britain before he finally found a 566 lb girl in the US to propose to, and then he was upset when she started losing weight because she was so dangerously obese (like she had trouble breathing, walking, etc).. she was worried she was going to lose him because he really likes HUGE girls.. but he said, "don't worry, sweetie, you're never going to be REALLY skinny so it's okay.." it was like, topsy turvy world.

Salvador is okay... it is just a sea of humanity, like entire families come here for carnaval (mostly to sell stuff) and they sleep on the street, plus there are just drunk people running around 24 hours a day. but it is SO relaxed, even more-so than rio, like today a guy walked into the internet cafe wearing a speedo, no shoes, and carrying flippers, hahah...Tonight I am just staying in.. basically all I did today was eat a lot and sleep and watch bad Brazilian soaps.. we only get 4 channels on the tv in our room so we are stuck watching wheel of fortune (brazilian style) and floribella (bad novela!!)... but i am trying to keep a positive attitude.

I mean, I guess I already knew that I liked TV but when I re-read my Brazil emails I expected to find some more profound cultural observations than that South Americans have bad hair. We all know that, Steph. And why the heck was I watching Brazilian MTV? In some way, though, I think watching TV does provide some cultural insight, even if that insight is largely lost on me. At least I always have something to talk about, no matter what country I'm in.

Yeah, what was I saying? Whatever. Gotta go, TV's on.

* I realize this one isn't actually about TV. But I kind of had to share it.
Posted by Steph at 9:25 PM No comments: