I haven't updated the old blog in a while because I was on vacation, and it was fantastic, and I want to tell you about it over several posts. This is pretty much the internet version of being forced to watch your aunt and uncle's boring slides from their latest trip to Maui when you go over for dinner. Dim the lights, please. Click!

The day after finishing work at the law firm in DC, I got on a plane to Boston, and that same day I took the red-eye to London. In London, I met up with my friend Ricardo, who used to go to law school with me but went back/escaped to England during our first year. When Ricky came and met me at the train station, he hadn't yet been to bed after partaking liberally of the London nightlife. We made quite a team for walking like zombies around the city, since I had been on a flight and in airports all night and also hadn't slept. We trudged around the city for a few hours and I chewed on a big baguette sandwich while taking in a bunch of the big sights -- Parliament, Big Ben, Buckingham Palace, etc. London was pretty much exactly as I expected it to look -- totally charming and pretty with beautiful green gardens and red double-decker buses. Charm alert!

After saying goodbye to Ricky, I took the tube to London Dungeon and met up with Vicky, my old friend who I worked with in Brazil. I hadn't seen her in almost three years and it was so nice being reunited with her. We went to her adorable apartment in Greenwich, dropped off my stuff, and then went to dinner at a Mexican restaurant in town, then to the local pub. It was all very quaint.

I got about four hours of sleep before waking up at 2am to go to the airport for my first EasyJet experience, which is apparently a British rite of passage. I had to fly out of Gatwick Airport, which is sort of/really in the boonies. When I got there at 3:45, the airport was packed with English people with straw hats milling around as they waited to get checked in for their flights to Tenerife and Palma and Santorini. After a bit of pushing and shoving, I got checked in for my flight to Split, Croatia -- yay!

Arriving in Split was thrilling because I was about to see my boyfriend, the handsome Alastair, for the first time in over two months. He surprised me by meeting me at the airport, and we took a bus back to our beautiful hotel on the outskirts of Split. This was the view from our hotel window: 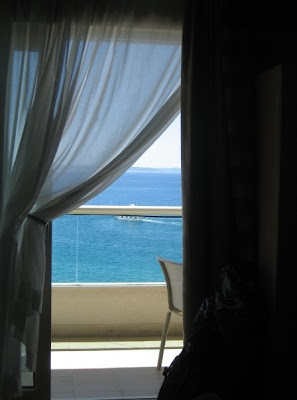 It was okay, I guess.

We spent a few days in Split, lying around on the rocky beaches, drinking beer, eating pizza, and relaxing at our fabulous hotel. Our next stop after Split was Hvar Island, which, Al and I both agreed, was a little TOO picturesque. Hvar has it all: crystal clear blue water, boats bobbing in the harbor, cobblestone streets, winding alleyways, and lively outdoor bars -- yeah, we GET it, Hvar, you're charming. Our time in Hvar was largely spent lying on the beach, swimming, drinking, eating, and marveling at the astonishing rudeness of the Croatian people. In terms of surliness, the Croatians give the Argentines a run for their money, which is no easy feat. For example, one day, Al and I went into the local supermarket to buy supplies for a picnic lunch. We needed some cheese so we were waiting at the deli counter as the two sullen female employees behind the counter flirted half-heartedly with some dude with an earring and bad hair. We waited patiently for them to finish their conversation and help us, but they glanced over at us and went on to ignore us for several long minutes. When their manager came over and told them to help us, they both turned, looked us up and down, and one of them said, "Da?" (yes?), as if our presence were a personal affront to her. I mean, we had interrupted her scintillating conversation with Earring McCreepy, so you can see how she'd be annoyed. How dare we demand a slice of cheese! Who the hell do we think we are?!

Anyway, we got the cheese in the end, but we left Hvar thinking that the Croatians are not the nicest peeps in the world. Al pointed out that their country is shaped like a boomerang -- an EVIL boomerang. But really, they don't need to be nice, if you think about it -- tourists are going to flock to the Dalmation Coast even if the natives greet them at the airport by spitting on their shoes. And, I must add that not all of the people there were rude. We encountered some very nice people, most of whom were old waiters. I love old waiters.

Our last stop in Croatia was Dubrovnik, which is one of the most beautiful capitals I've ever seen. The old town is walled in and looks like it's been preserved since Roman times. Here's a street where people actually live: 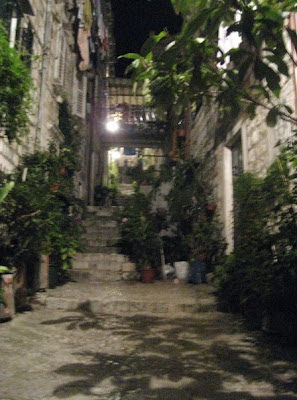 Our last night in Dubrovnik, we went to a pizza place called Mea Culpa and then wandered through the old city till we found this little outdoor bar looking over the water. The bar was special because it was perched on a cliff above the water and was lit by candlelight -- romantical!! -- and they were playing a tape of Kenny G covers. Until you've heard Kenny G cover "Kiss from a Rose," you really don't know what romance is.