Santa (in the guise of Air Canada) surprised me today by delivering my long-lost luggage, which I was sure was lying in a drainage ditch in Saskatchewan, lost to me forever. Honestly, having my luggage back was the best Christmas present a girl could hope for. Well, almost the best -- when I opened my bag, I realized that my camera was gone, and so was the one wrapped gift in my entire luggage, the Estée Lauder Beautiful lotion I had bought for my mom in Ottawa. Some Air Canada employee's wife is probably slathering that stolen lotion over her rough, wind-chapped skin as we speak. The nerve! But I do get great comfort out of the fact that my camera was broken AND without a battery, so joke's on whoever stole that, am I right?

Despite the missing goods, this Christmas day has been lovely. I slept in, ate, talked to Al, opened presents (a warm pair of gloves, a necklace, a spa gift certificate, and a new makeup bag), worked out, and then my parents and I went visiting (wassailing?). The highlight was probably the stop at my grandparents' house, where I ate a cold duck-goose-turkey sandwich on sourdough and more chocolate bark than anyone should be allowed to consume. Mmmmm, chocolate bark. Now I am at home, ensconced in front of a House marathon in my PJs. Oh, life is so good.

I hope everyone had a fantastic Christmas/Hanukkah/Kwaaanzaaaa/Handwashing Awareness Week/other winter celebration of your choice. Feliz natal!
Posted by Steph at 11:24 PM No comments:

I promise not to write an angry screed against Air Canada or their employees. This isn't really the proper forum for angry screeds.*

I will only ask the following question: how does an airline go about losing the bag of a passenger who has never left the airport? It's a riddle!

No, but seriously, Air Canada? You canceled my flight, so I never left Montreal. So how the HELL did you manage to lose my bag? Do you need me to ask this in French?

Anyway, I am still in the Montreal Airport, which has become like a horrible, French Canadian home away from home for me, and I am supposed to be flying out in 20 minutes. If they cancel my flight today, I will kill someone. You'll see my name in the news (le Gazette!).

*Not that that's stopped me in the past.
Posted by Steph at 11:49 AM No comments: 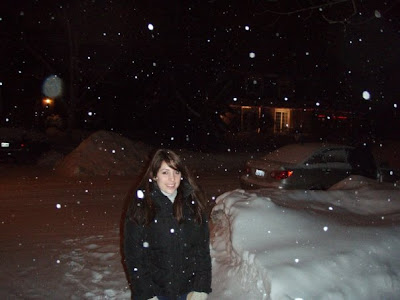 Why am I in the land of poutine and maple syrup, you might ask? Well, I went up to Ottawa for a few days to spend time with Al and his mom, stepdad and brother before Christmas, and we got hit by what the Ottawa paper was calling "Snowmageddon 2008." You know if a Canadian paper is comparing a snowstorm to the apocalypse, it has to be a decent amount of snow... or else just a slow news day. Either one is plausible in Canada, I suppose.

Anyhoo, after reading about the impending End of (Snow) Days, I decided that it would be wise to change my bus ticket from Ottawa to Boston to come back on Sunday morning instead of Sunday night. I figured giving myself an extra thirteen hours to catch my flight to San Francisco on Monday afternoon would be more than enough time -- but the Greyhound people (damn their eyes!) had other ideas, and canceled all buses to Boston today. Nooo! (Nooon! <-- the Canadian government requires me to translate this.)

Suddenly, I found myself in the Montreal bus station, alone, surrounded by French Canadians, the undeniable smell of stale croissants hanging in the air. Noooo! (Noooon!). Of course, I instantly assumed I'd be spending the night on the floor of the bus station, subsisting on poutine cheese curd runoff and Coke Diete, but Al's mom saved the day and booked me a plane ticket out of Montreal into Boston this evening. So here I am, in the Montreal airport, hanging out until my flight leaves in a few hours. Keep your fingers crossed that they don't cancel this flight, because if they do, I might miss my flight to California tomorrow.

I hope none of you are reading this while stranded in a bus terminal or airport at the moment. Stay in and out of the snow/ice, or, if you're in San Francisco, make sure to put on a sweater before going out in the frigid 50 degree weather (hey Dad).

Sorry for not writing for a while; it's been exams season here at Harvard Law. Consequently, I've been dividing my time between studying diligently at the Hark, our law school commons, and trying to maintain a somewhat normal social life. So, in the past week, I've written a 25-page paper, taken an eight-hour exam and studied for another eight-hour exam (to be taken tomorrow), but I've also managed to go out drinking with a bunch of 1L's, go salsa dancing, and attend an office Christmas party (not my own)! Now that's what I call multitasking.

After recently spending an inordinate amount of time in the Hark, a place to which people come to both study and socialize, I have become acutely aware of my own particular issues with other people. The basic problem is the following: I hate being around other people who are studying because they either sit alone and make annoying noises, or else they sit with other people and make annoying noises, usually insisting on discussing their upcoming exam in excruciating detail. But I also hate being around people who are not studying, because they make even more annoying noises, and tend to have even louder, more distracting conversations about even stupider things. Yet, I can't be left alone in my own room to study, or I'll end up watching daytime TV and/or giving myself a pedicure, so I have to go somewhere public to get my study on. It's quite the dilemma.

I'm not being unreasonable here, I assure you. First of all, according to a Cosmo "couple's quiz" I recently forced my boyfriend to take with me, I am a person whose dominant sense is hearing (while he is more of a "seeing" person). This means, according to the researchers at Cosmopolitan University (School of Pseudo-Science), that I get easily annoyed/distracted by noises around me and enjoy long, cloying conversations with my significant other. True and true!

This sensitivity to noise causes me a lot of angst when I am studying in the Hark. While it is quiet there, it's not quiet enough for me, and even the lowest voices carry. I mean, I can deal with low-level conversations going on near me, but I definitely can't deal with listening to any of the following, all of which I've had to endure this week:

1. Intense study group conversation involving a guy casually throwing out the phrase "seemingly thin veneer," as if the term "veneer" doesn't already imply "thin," and as if that pretentious "seemingly" was necessary.

2. A guy loudly snorting, sniffling and making other gross mucus sounds, continually, for like three hours.

3. Shrill cell-phone conversations about the stress of exams.

5. Slurping sounds. WHY did the Hark need to start serving Asian noodle bowls?

7. The laughter of children coming from the HLS skating rink.

It's been a rough week for me. I've gotten through it by heavily relying on Diet Coke, my headphones, and Swedish Fish. Thank God I am done tomorrow, and then I can take off for Christmas break. Almost there...
Posted by Steph at 9:46 PM No comments: