I've been in Buenos Aires by myself for four days now, and I gotta tell you, it's been a roller-coaster ride of emotion. Well, mainly emotion, but also boredom and insomnia. I am very happy to report, however, that things have definitely taken a turn for the better. The mopey, sad Stephanie of the last three days has been replaced by the normal, chipper Stephanie! My boyfriend, who I have been crying to via webcam recently, rejoices. But let me walk you through my last few days to give you a sense of what I've been up to here in la ciudad porteña.

Monday was my first full day in Buenos Aires by myself. I woke up optimistic, determined to go out and catch the city by its tail and shove it in my pocket, or something. As the day passed, that unstoppable optimism turned out to be rather stoppable. The day was okay, I guess; I spent time working on my research project (sending out surveys, setting up interviews, etc.), going for a hot and sweaty run in the park (see picture below), buying groceries (olive oil, wheat pasta in a bag, cheese, etc.), wandering aimlessly around Recoleta and Palermo, and watching TV. 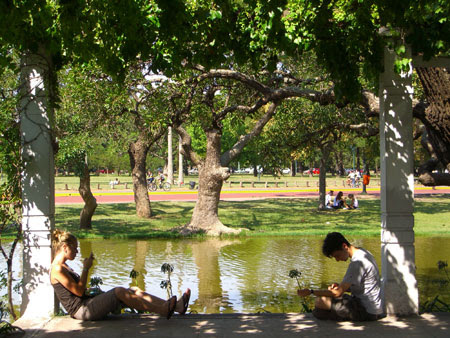 By the end of the night, however, I had begun to feel lonely and blue, and when I was still wide awake at 3:30 AM, the loneliness amplified into intense anxiety and tears. Not my best night. Thank God for skype -- I talked, or rather blubbered, to my cousin Catie and Al, and finally fell asleep at 5:30 AM. Definitely not my best night.

Tuesday, I decided to break out of my rut of wandering aimlessly by instead wandering aimfully to a designated location, el Museo Nacional de Bellas Artes. I walked there by going down Avenida Libertador, a long avenue lined with fancy apartments with thick wooden garage doors and marble entryways. As I walked, I noticed that clinging around the doorways of these beautiful apartments was a distinctive, light smell, which I recognized instantly as what I think of as the South-American-wealth smell. I first smelled it when I moved to Brazil and stayed at my boss's apartment in one of the chicest neighborhood of São Paulo, Vila Nova Conceição. It's this unmistakable smell that brings to mind potted palms, white marble floors, chandeliers, fruit yogurt, and cleaning solution. Funny how that smell only exists in South America, though. Rich people's apartments in the U.S. smell different, somehow.

Anyway, Bellas Artes is a nice museum with an impressive collection of art, and I knew as soon as I walked in that I would be bored with most of it, so I skipped directly to the stuff I like, Latin American art. I have learned after years of sporadic museum going that I get no cultural enrichment whatsoever from forcing myself to look at numerous oil portraits of pasty-faced children in ruff collars. It's sort of like my revelation as a middle schooler that I didn't actually need to read every single Sunday comic, especially the ones I hated, like Family Circus and For Better or For Worse. So now, when I get the Sunday paper, I only read the comics I like (Garfield, the Peanuts) and when I go to a museum, I only look at the art I find interesting.

My path through the museum took me from the semi-interesting to the fascinating. First I spent some time in a low-lit room peering at a bunch of Pre-Columbian vases used to smoke hallucinogenic plants. Then I went to the Argentine art collection and breezed through numerous portraits of sallow, bored looking people, as well as a bunch of landscapes of running horses and serious cowboys and angry Indians. The ush. Then, I checked out the Latin American masters exhibit, which included art from some of my favorites (Diego Rivera, Frida Kahlo, Wifredo Lam). One painting that I really loved was "La Venus Criolla:"

But my absolute favorite was an untitled painting by Jorge Pirozzi:

Can I get a dress that looks like that painting? I'd wear it every day.

My last stop at Bellas Artes was the photography exhibit on the top floor, which featured historical moments caught on film, such as the death of Che, Menem's presidential victory, the assassination attempt on Ronald Reagan, etc. It was weird looking at pictures of Alfonsín and Menem, both of whom I met two summers ago, but not that weird, I guess, considering that I am in Argentina, after all.

On my walk back from the museum, while marveling at what a completely different city this is during the summer than during the winter, I took a different route home. I ended up walking down what I now believe is the coolest street in Buenos Aires, calle Lafinur. I don't know what it was about this street that moved me so, but I just loved everything about it: the trees, the balconies, the awninged cafés - I guess now that I'm describing it, it seems like any other street in Buenos Aires, but it felt unique somehow. I passed by a chic-looking boutique and looked up to see a skinny, weathered looking woman leaning out of the second-story window, cigarette dangling out of her mouth, massaging her temples. I bet she wouldn't have a headache if she knew that she works in a boutique on the coolest street in Buenos Aires. Oh, and did I mention the Evita museum is on calle Lafinur? I mean, what more do you want?

Today was my best day in Buenos Aires by far. I went for a nice run in the park again, which reminded me a bit of running in Parque Ibirapuera in São Paulo, except minus the Brazilian park mainstays of tandem bikes, corn on the cob, and an abudance of boob-popping sports bras. After my run, I headed out to do the first pair of interviews for my project. The interviews were exhilarating and a big confidence-booster, and how refreshing to have some sort of meaningful human contact for the first time in over four days! It's really strange being in a foreign city by yourself because it means that you go through the day without having any real, live conversations with anyone. Sure, you exchange pleasantries with the guy who weighs your vegetables at the grocery store (and who subsequently hits on you) or you ask the surly woman behind the glass to give you two subte tickets, please, but other than stuff like that, no real human connection happens. It's an odd feeling, floating through space without having anyone to talk to or share things with. Don't get me wrong, I'm all for long, self-reflective walks, but there's only so much self-reflection one can do before one just wants to go get dinner with someone else. Needless to say, I am amped for Karen to get back to the city and for Al to get here. But until then, I'll keep on keepin' on.