Hi readers. I just wanted to check in with everyone to let you know that I am still alive and did not get kidnapped by gypsies, tramps, or thieves.* Instead, I went on spring break to San Francisco! And, most exciting of all, I took a roadtrip to Reno, Nevada, hence the title of this post. 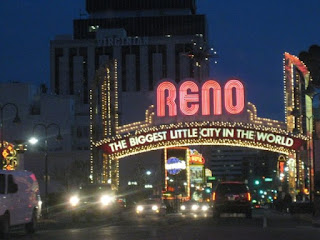 Here's the thing I have recently learned about Reno: you have to have some ironic distance on that city to truly appreciate it. I learned this lesson the hard way, since my parents lived in Reno (for reasons still largely unclear) for four years, from 2002 to 2006. When my mother told me my parents were moving from my idyllic hometown in suburban Detroit to a city whose name I recognized only because Whoopi Goldberg's character in Sister Act (Deloris Van Carter) used to be a lounge singer there, I freaked out a little bit. I mean, Deloris left for a reason, right?**

I remember driving from Michigan to California with my dad before my sophomore year of college, and passing through Reno to see my parents' condo. I had been emotionally stable the entire trip up to that point -- I even made it through Omaha with dry eyes -- but when we passed under that gaudy, neon arch welcoming us into The Biggest Little City in the World, I lost it. 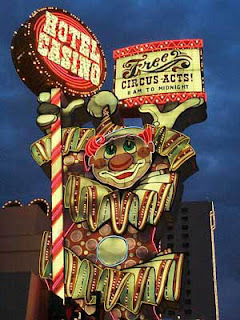 I dare you to look that clown in the eye and not break down, too.

That first encounter marked the low point of a never-fantastic relationship between me and Reno, but I did gradually come to appreciate certain aspects of the city while my parents still lived there. For example, there is an all-you-can-eat sushi place that serve giant glasses of wine! And there is a good Basque restaurant! And you're only thirty minutes from Tahoe! These are the things you will constantly hear people from Reno telling skeptical outsiders who aren't aware of the many cultural and gastronomical delights that Reno has to offer. Ahem.

One thing I never really got about Reno, though, until this most recent trip, was the whole gambling side of the city. Sure, when my parents lived there I had occasionally come into the casino in the middle of the day on a weekday with my dad when he placed a sports bet, but I certainly wasn't doing any of my own gambling on those visits. I was too busy staring at the legions of glassy-eyed retirees feeding their pension money, one dollar at a time, into the penny slots. Of course, sometimes you'd see one of those old people taking a break to suck air out of their oxygen tank or be pushed around the casino floor by their nurse, but they mostly stuck to their gambling. Even more depressing were the able-bodied, youngish-looking people listlessly playing the slots or pulling the crank on one of those machines that promises to pay out $1,000,000. Shouldn't those people be at work? I mean, call me judgmental, but there was something palpably sad and desperate hanging in the neon-heavy air of those casinos, and it made me uneasy.

On this trip, however, I approached Reno with a different attitude. For one thing, I was traveling with my friend John and my boyfriend Al, two Reno outsiders who were enthusiastic about seeing a new place. It also helps that John has a particularly well-developed love for American kitsch and had just been to Vegas and HATED it: both factors that weigh heavily in favor of liking Reno.

We stayed at the extremely tacky (yet loveable) Peppermill Hotel and Casino. The hotel part is done up in a "neo-classical" Italian style, with plush carpeting and loads of "classical" paintings, such as the one below, which John and I convincingly reenacted. 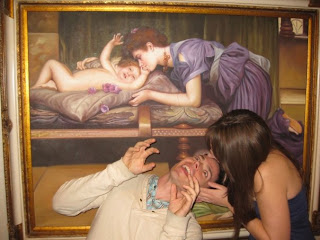 The casino part, on the other hand, can only be described as a neon nightmare. Understand that I am using the term "nightmare" here in only the fondest sense of the word: I mean, how can you not kind of love something that looks like this? 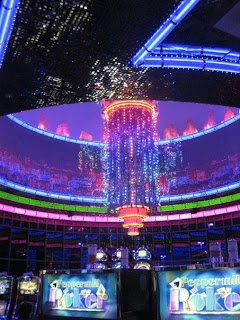 After we had checked in to our rooms, we hit the casino floor and went to town. After approximately seven minutes, all of us had developed full-blown gambling addictions and were pawing at the screens of the penny slot machines like wild animals. John even came up with nicknames for us: Gamblina (me), Gamblox (John), and Gamblor (Al). We were monsters.

However, even though we had turned into the pale, sweaty gambling freaks that I had judged so harshly on my previous trips to Reno, we managed to have SOME self-control, and each only lost a little bit of money ($15 or so), which was totally worth it since we got free drinks all night. Take that, Peppermill management -- we used you! (Kind of.)

The next day, we hit up one of the casino's many restaurants and ate giant omelets and buttery toast before hitting the road back to San Francisco. We all reflected on how obsessed with gambling we had become in such a short period of time, and vowed not to waste any more money. Three minutes later, as we were walking out of the casino, we decided to each play just a few more dollars in the $.25 video poker machines. The first step to recovery is admitting you have a problem, I suppose.

Anyway, it was a great trip and I have a new appreciation for the Biggest Little City in the World. Go check it out for yourself -- just avoid looking that clown directly in the eye, whatever you do.


* We'd hear it from the people of the town.
** To give my parents some credit, like Deloris, they also eventually fled Reno for San Francisco.
Posted by Steph at 6:01 PM No comments: