Okay, I'll admit it: when I used to watch it (before it sucked) the best part of American Idol for me was always the really terrible auditions. You know, the ones where someone comes in with a dream and a prayer (and a terrible voice) and the judges mercilessly shoot them down and send them home in tears? My favorites are actually the ones where the auditioner argues with the judges or tries desperately to prove how talented he or she really is, sometimes by dancing. It never works.

Does this make me a bad person?

Oh well. So, even though I have seen some truly coo-coo stuff on American Idol, there is something even more hilarious about the rejects from the Brazilian version of the show, Ídolos Brasil. I don't know how I stumbled upon this clip, which is entitled "the best of the worst" of Brazilian Idols, but I did, and it is incredible. I suppose the clip might lose something if you don't speak Portuguese, but probably not. The outfits, hair, jewelry, and general Brazilianness of the whole thing should speak for itself.

My favorite guy has to be the one who sung that "Numa numa ne" Romanian song (in Portuguese) and steadfastly ignored the judges as they repeatedly tried to cut him off. That dancing cannot be contained! I also love how the judges openly laugh at the contestants. The Brazilian Paula is actually mean, turns out. I think I like her better than our Paula.

Perhaps this next clip, which might be the best thing I have seen (except for the Susan Boyle video -- love her), will make it clearer:

Growing up outside of Detroit had many unique pleasures (see, e.g., frozen custard) but one of the things that I loved most about my childhood in Michigan were the amazing TV commercials. I know that statement probably makes me sound like a corporate pawn, but I'm not talking about the sophisticated, slick TV spots for Coke or Apple or whatever that you see nowadays. No, no -- I'm referring to true TV gems: local, metro Detroit commercials from the 90s. It really doesn't get any better.*

Plus, if you know me at all, you probably know that I love jingles. If it didn't sound so pathetic, I'd even go so far as to say that jingles are one of my "interests." And let me tell you, Detroit commercials back in the day had some great jingles: the Metro Detroit Ford Dealers song alone is like 4 minutes long with an instrumental interlude. I searched long and hard on the interweb to try to find one of those Ford commercials from the 1990s, but couldn't find anything. And I was dismayed to learn that Ford replaced its old, uplifting (if not excessively long) jingle with a new, much douchier one. The auto industry really is going downhill.

Even more disappointing: my number one FAVORITE commercial of all time, for Alan Ford dealership in Bloomfield Hills, Michigan, is apparently now the stuff of legend and doesn't exist on the internets ANYWHERE. That means I have no choice but to describe it to you. Okay, picture this: a cartoon cowboy and his dog. Got that? Okay, stay with me here -- the cowboy sings this song:

Here dog, come on dog!
Me and dog want you to come to Telegraph Road
Right now
Get a good deal.

That's it. Ask anyone who was alive in Detroit in the 1990s and I guarantee they'll know the "here dog, come on dog" song. It had a huge cultural impact.

Maybe you'd have to be there.

In a close second in the contest for the best Detroit commercials EVER are the classic commercials from Mr. Alan's, an "urban wear" chain of a slightly ghetto persuasion (see http://www.mralans.com/locations.php). Anyway, Mr. Alan's commercials always involve a cartoon man (Mr. Alan) with big pants and extremely odd facial hair:

It's amazing Mr. Alan was able to flash those ambiguous gang symbols with only four fingers on one hand, isn't it?

A typical Mr. Alan's commercial from the mid-1990s would feature the cartoon Mr. Alan superimposed next to still photos of shoes and jerseys with a voice-over announcing the prices of those items with increasing levels of urgency. It usually went a little something like this:

You get the idea.

This is pretty representative:

And here is a slightly upgraded version of the classic Mr. Alan's commercial format, which actually involves real people talking:

One of the best Mr. Alan's commercials ever has unfortunately been taken off YouTube for reasons I do not fully understand, but you can use your imagination. It involved a high school kid trying to impress a girl and succeeding marvelously by going to "see the man" (Mr. Alan) and getting some sweet duds. Before he went to see the man, he looked like a total idiot in a plain red tee shirt. Once he emerged from Mr. Alan's, completely festooned with logos and insignias, though, things really started to look up for him socially. Thanks, Mr. Alan!

I miss those commercials. Here in Boston, there are a lot of cloying jingles on the air ("Bernie and Phyl's, quality comfort and price" -- ugh, we GET it already) but there aren't any ads that truly compete with the magic that came out of Metro Detroit. Oh, well. At least I have my memories.

*Except for maybe Brazilian commercials, but that's a post for another day.
Posted by Steph at 9:27 PM 8 comments:

Okay, so this video is exactly what it looks like: a Turkish TV anchorman in blackface reporting on Obama. I listened to the video and heard the word "negro" and "Obama" but everything else was, you know, in Turkish.

Oh, Turkey! You're so adorably offensive!

The best part of the whole thing are the comments left on YouTube defending the anchorman and claiming that Turks are not racist because there are no black people in Turkey. For example, one person helpfully explained, "speech has NO REFERENCE TO skin color since the history of skin color is FOREIGN in Turkey...we may replace "black face" with BLUSHING, as you ask someone a favor. Anchor tried to play on words by use of Turkish proverbs since Obama used a TUrkish proverb in his speech. LOST IN TRANSLATION." This person has a point: it IS easy to confuse greasy black paint for blush. Who hasn't made that mistake before?

Someone else wrote, "shortly,we havent any problem with skin color of obama,we have some concerns contiuning for a long time.that video explains them.He said a Turkish idiom:" a person who wants something has dark skin yet, a person who doesnt give anything has darker skin than a person wanting"(translated roughly) as you watch ,due to this idiom,he painted his face black and he is requesting something related to policies of america about Türkiye."

Oh, okay. That doesn't sound racist at all.

Here's the thing, Turkish anchorman. You may not have black people in your country, but you can still make a racist joke (even unintentionally). Next time, skip the blackface AND the monumental string music in the newscast, and you'll do much better.
Posted by Steph at 10:23 AM 3 comments: 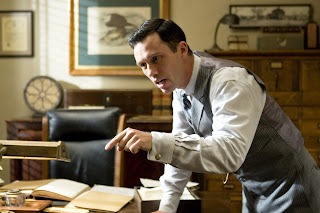