Hermione and Harry grow up. Sort of.

It's a time of transition for me and a lot of people I know. We've graduated law school, we're going to start real jobs in a few months, we're studying for the bar and hoping it's the last ridiculous and anxiety-fraught test we'll have to take for a long time, and we're approaching that weird, late-20s period of life where we feel like we should be real adults but we're still living in our parents' basements and dressing up like Hermione Granger for Harry Potter movies. Those last two items might just be me, actually.

Dressing up for Harry Potter movies is a tradition between me and my friend John that dates all the way back to 2007. That summer, as you might recall, John and I were both working in Buenos Aires for human rights NGOs. By July, after being fully immersed in porteño culture (lo bueno y lo malo) for two months, we were both craving a good ol' American nerd-fest involving magic and wizards. So, when the 5th Harry Potter movie came out in Argentina, John and I were all over it. We decided to dress up, to have the fullest, most die-hard Harry Potter experience possible. (Also see http://teffsinbrasil.blogspot.com/2007/07/god-doesnt-want-us-to-go-to-uruguay.html)

The problem, it turns out, is that there aren't a lot of shops in Buenos Aires catering to a wizarding clientele. I ended up cobbling together a Hermione outfit out of some work clothes, a dingy yellow scarf that I found in a strip mall on my way home from work, and a wand made out of a Hannukah candle that I purchased in an odds-n-ends shop on Avenida Santa Fe. It was the best I could do. John's outfit was similarly slapdash, but we ended up being the best dressed ones at the theater! 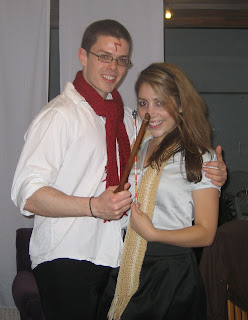 In fact, we were the only people dressed up in the entire theater, and possibly in the entire city. Okay, let's be real: we were the only ones in the entire country of Argentina who dressed up as Harry and Hermione for this movie. We also made the helpful choices of drinking a lot of red wine before heading out, and choosing the sketchiest theater in the city for a late-night showing of the film. Let's just say that there were more hostile, rat-tailed youths clad entirely in denim eying us and our magical get-ups than I was comfortable with.

Anyway, this year, John and some other friends and I decided to repeat our Harry Potter experience, minus the angry porteño youths, in San Francisco. I constructed my Hermione outfit entirely from the juniors department at J.C. Penney, and I have to say, it was marvelous. John showed up as a hipster Cedric Diggory, and Jon, another friend, brought Hedwig, so we made quite the trio. 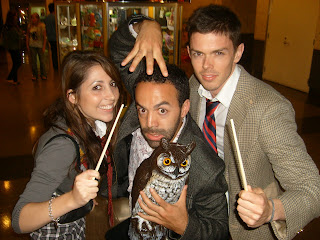 Surprisingly, we were again the only people in the entire, ginormous theater, dressed up. Oh, well, at least there were no local toughs hanging around ready to kick our magical butts this time.

Anyway, John and I may be almost grown-ups now, but we still know how to have fun, no matter how many people stare at us incredulously, which is something I don't see going away with the onset of adulthood. Plus, we still have the next two Harry Potter installments to look forward to, and since John is moving to London for work, we'll have ample opportunity for extra-authentic nerdery. 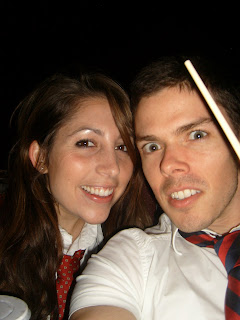 Thank you, Harry Potter, for being the last bright spot on my pre-bar summer. I'll see you on the flipside, fellow nerds!
Posted by Steph at 2:12 AM