Hello! It's time for the final installment of my Austria-Slovenia vacation recap: Ljubljana, Slovenia.

Al and I were both really excited about going to Ljubljana, mostly because we'd heard great things about it, and partly because neither of us had ever been to a city with so many superfluous j's in its name before. Ljubljana is the tiny, precious capital of Slovenia, which is a tiny, precious country. Ljubs is miniscule: only 250,000 people in the whole capital! It's also gorgeous, set along a river (the aptly named Ljubljanica) with weeping willows hanging down along the banks. Al said the city reminded him a bit of Amsterdam, because of the narrow houses with balconies lining the waterway. But Ljubljana takes the cuteness a step further, with such adorable flourishes as this "triple bridge" in the old town: 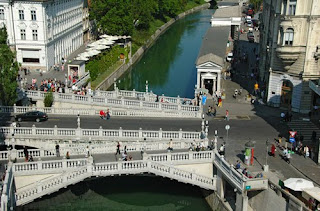 Ljubs isn't just cute, though - it's also way too cool. There's artsy graffiti everywhere (probably mandated by the EU), everyone wears skinny jeans and Chuck Taylors, and the facial-piercings per capita rate is sky high. Even the hostel we stayed at was edgy - it was a converted prison called Celica. Each of the rooms is a "cell" (complete with bars on the door) designed by a different artist. The hostel is also located in Metelkova, an "autonomous social center" in the middle of the city. I think this means that people within the seven-building range of Metelkova are allowed to do way more drugs than everyone else in Ljubs, but I'm not sure.

So, as we were checking in to Celica, we were told that for the first night, we'd have to share a room with some other people, since all the private cells were booked. Fine, I thought, no big deal. We'd probably just end up sharing with another couple, some European version of us who would probably end up becoming our best friends and whom we'd vacation with for the rest of our lives. It just seemed like the most realistic scenario. To my plainly undisguised horror, however, when we got to our room, we realized we were sharing with two Swiss women and a baby. That's right -- we had to share a room with what is most likely the only infant in the autonomous social district of Metelkova. I was not pleased.

Al initially was a much better sport about our baby roommate than I was, saying that he seemed "well-behaved" (he was Swiss, after all) and it would only be for one night. Just one night, how bad could it be? Bad, as it turns out. Apparently even polite Swiss babies cry inconsolably during the wee hours of the morning, which we found out the hard way. Not to be dramatic or anything, but that night was a six-hour long audible parade of horrors. There was, of course, the wailing baby. Then there was the drunken howling of inebriated Englishmen immediately outside our door, who ran up and down the hallway making weird hooting noises and pounding on the walls from approximately 4 am to 5 am. Then -- and this was the absolute worst -- one of the Swiss women started breast-feeding the baby (who was at least 18 months old, come ON) approximately 1.5 feet from my head, as I cowered into the pillow, squeezed my eyes shut and prayed for it all to be over soon.

The next morning, I realized that I am a person who is capable of shooting dirty looks at an 18-month old. "Stupid baby," I muttered under my breath, seeing him happily playing with his Swiss wooden toys on our dormitory floor the next day. But the real target of my anger was his mother(s), who seemed happily oblivious to the fact that it's wildly inappropriate to bring a baby to a shared dorm room unless you are escaping a war zone (and I don't think Lucerne counts).

Our visit improved significantly once we got our own room at the Celica. We spent the rest of our time in Ljubs walking around the old city, visiting the castle on a hill, drinking cheap Slovenian wine, and eating absurd quantities of burek, which is some sort of Balkan meat pie that is so fatty and delicious, I shudder to think what would happen if food courts in the U.S. ever discovered it. 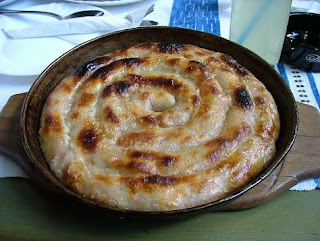 Overall, it was a lovely time and we were sad to leave Ljubs, but we had an enjoyable (and Burek-filled) train ride back through the Semmering Pass and into Austria, where we spent our last night in Vienna. A good end to a good trip. Tschuss!
Posted by Steph at 2:52 PM