Hey peeps. Long time no blog, right? Sorry about that. I was working and stuff.* But I'm back to fill you in on what I've been up to over the past few weeks, starting with my first non-Sao Paulo weekend since coming to Brazil! Here goes!

So, this past weekend, my friend Yohanca and I decided to hit the road and go to Ubatuba, which is a beach town about midway between Rio and SP. We took a four-hour bus ride, which started off delightfully, with us merrily stuffing our faces with pizza crackers (yes, these exist!) and beer, and ended with us both reeling with nausea from the combination of twisty-turny bus ride and godawful air freshener that someone insisted on spraying around the bus approximately every six minutes. I promise you that this air freshener was far more unpleasant than any conceivable stench it was intended to cover up. This is the kind of toxic, Brazilian air freshener that coats the back of your throat, burns the inside of your nostrils, and makes you cough and sneeze simultaneously. I also think it causes mild brain damage: to wit, I decided that Y and I needed to get off the bus at a stop a good 50 kilometers from where we were actually going. Blame it on the a-a-a-a-a-air freshener.

One $75 dollar cab ride later, we arrived at our hotel, which was a non-descript yellow building on a quiet dirt road. Since it's winter here, Y and I were the only guests at the hotel, except for the huge, horrifying moth that was chilling on the ground outside our room. I guess this moth was taking a much-needed vacation from terrorizing Japanese cities and decided to stay at the Alentejano Hotel to get some "me time." Besides Mothra, the only other souls in the hotel were the staff. Oh yeah, and there was a really annoying bird that sounded like a mini air gun, which apparently lived right outside our room. Isn't nature grand?

Anyway, after that first night marked by moths and nausea, things improved greatly for us in Ubatuba. We spent the whole next day lying on the beach, drinking beer and eating an assortment of bizarre snack foods (including bacon-flavored chips with the texture of styrofoam with a picture of a demented squirrel on the bag) and beach cheese. Ah, beach cheese. I feel like I should capitalize it to show some respect: Beach Cheese. For those of you who haven't had the pleasure, Beach Cheese is perhaps the best cheese-related thing in Brazil, rivaled only by cheese bread and cheese ice cream. And I guess air cheese (proper name: queijo Minas - but it tastes like delicious air) . . . okay, so Brazil has a lot of good cheese going for it. But Beach Cheese, in my humble opinion, takes the (cheese)cake. It's a rubbery, white cheese, similar in flavor and texture to Haloumi, which comes in a block/stick, and is lovingly fried/grilled for you right there on the beach by your local Beach Cheese Guy (see below), who walks up and down the beach carrying a portable oven/grill. I am not making this up. Brazil is so awesome. 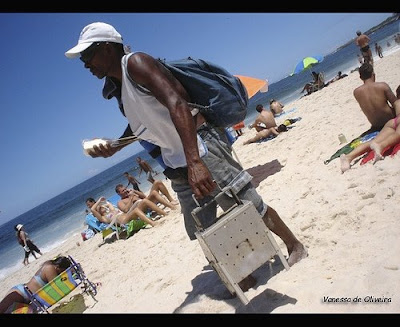 Other than the Beach Cheese, not a lot happened at the beach. We read a lot, chatted, ate weird snacks (aside from the aforementioned squirrel bacon snacks, we also found some so-called "egg sponge" bread that tasted, oddly, like cake), saw assorted carcasses lying on the road (two frogs!) and laid around. It was delightful. We also ventured into the main town for dinner on Saturday, which was an odd, rather anticlimactic experience. The main drag in the town was filled with an uncomfortable mix of families with small children, vagrants, and gangs of way-too-sexually-mature-looking 14 year-olds. There seemed to be no one there between the ages of 15 to 35 - was there some sort of city ordinance that we missed? Were all the twenty-somethings on another street? It was baffling. Since the options were a bit sparse for entertainment, we went to a homey, wood-paneled pizza place for food and then waddled over to the serve-yourself ice cream parlor to put the cherry on top of our weekend sundae of gluttony. This was instead of venturing into the one bar on the strip that seemed to be popular, because I was too intimidated by those sexy 14 year-olds.

So, that was my weekend at the beach. It was lovely to get out of the city, but I knew I missed SP when my cab back from the city bus station crawled past a gang of transvestite prostitutes in butt-less skirts (these exist, too) shaking it for the traffic. Welcome back.

*'Stuff' being mainly watching reruns of Oprah and eating cheese.
Posted by Steph at 9:33 PM