Here is my final (for now) Teffs-in-Brasil email. Enjoy!

It's hard to believe that it's been SIX whole months since I arrived in Brazil, but I guess time flies when you're working long hours at a tedious, mind-numbing job. That's the saying, right?

I really can't wrap my mind around the fact that I've been here for half a year. So much has happened here in this gigantic, crazy country! Dilma got elected (sigh), as did a (possibly) illiterate clown (double sigh), Rio became a war zone, Brazil got its ass handed to it in the World Cup, someone spelled my name "Stethanie." So much stuff! And I guess stuff happened in the US, too. Or whatever.

Six months. Whoa. When I arrived here it was June and now it's December -- the warm heart of Brazilian summer and the frozen, miserable heart of American winter. I'm already scared about getting off the plane in DC on Saturday night with no winter jacket, no boots, and no gloves, with my already pitifully fragile circulatory system softened into utter uselessness by six months of lazy, South American heat. Pray for me.

So, I guess since this is my last Teffs-in-Brasil email for a while, I should probably wax rhapsodical about my time here and tell some witty anecdotes about cheese or whatever I usually write about. But to be honest, I am SUPER tired, because I've been going out this week *a lot* (trying to squeeze every last drop (of alcohol, mostly) out of Brazil before I leave) and during my free time away from partying, I've also been working, so my brain feels like mush, and whatever quadrant of gray matter that's in charge of wittiness is not lighting up today. I can't even get a metaphor right. Gray matter lighting up? C'mon, Steph.

But, I will say that although the last six months have had, shall we say, ups and downs, overall, I am SOOOOOO glad I came. Seriously. I know some of you have listened to me bitch hard-core about some aspects of my life here: my job, being lonely, not being able to find a decent piece of gum in this town, the weird smells, the fact that the toilet lid in my apartment touches your back when you sit down (*shudder*), the outrageous prices, etc. But you know what? All of the inconvenience, loneliness, and resentment was worth it. Over the last six months, I've made new friends, improved my Portuguese *vastly*, learned a lot professionally, and, yes, grown as a person. I know, gross.

This past weekend was particularly wonderful. It was filled with karaoke, towers of beer, barbequed meat, caipirinhas, Brazilian music, fresh fruit, dancing, buckets of rain, and intense sun. Sometimes all at once. The whole weekend left me with a warm, benevolent feeling about Brazil in general, and put a lot of the bad stuff in perspective. Of course, every day can't be a karaoke-barbeque-beerfest, but it's a nice goal to shoot for in life.

Anyway, it's nice to end my time here on a good note, and coming up I have so much to look forward to. I'm spending Christmas and New Years with Al and we're seeing all three of our familial units, in three different locations. International Christmas travel adventures will abound! In January I restart work back in DC -- never thought I'd say this but I can't wait to get back into arbitration. All in all, I have a good feeling about 2011. I mean, it better be good since the world's ending in 2012 and all.

Hope to hear from all of you when you have time. I'll see you guys on the flip side!

Beijos
xx
Eteffi
Posted by Steph at 5:08 PM No comments:

I can't believe I have been here in Sao Paulo for almost six months - in a lot of ways, it feels like I just got here like, a week ago. Then again, some days it feels like I have been here for an eternity. The last six months have been, overall, a fantastic experience. I am so thankful I had the opportunity to come back to my beloved Brazil to work, make new friends, improve my Portuguese, and, most importantly, eat an ungodly quantity of mangoes. But there were definitely hard moments along the way, mostly having to with my extremely demanding work schedule (which, incidentally, is also to blame for the severe lack of bloggage - that and my incurable laziness), and also having to do with the extreme distance I felt between myself and loved ones. There were definitely days where Brazil felt like Siberia.

But now, I have less than a week to go here, and I am trying to process what it means that I have spent the last half-year in Sao Paulo. It's weird. But good. And, since I have failed to diligently journal my escapades in this space (or in any other space apart from my brain, which is not super helpful to anyone, including me), I am going to attempt to do an abridged list of Things I Did in Brazil, version 2010:

1. Got into soccer, albeit temporarily, as a total fair-weather fan. Lost all interest once Brazil and the U.S. were eliminated. Subsequently developed a healthy loathing of the vuvuzela.

2. Laughed out loud, against my will, at an episode of The New Adventures of Old Christine. You can only see that show so many times per day before it starts to wear you down. I blame Stockholm Syndrome. 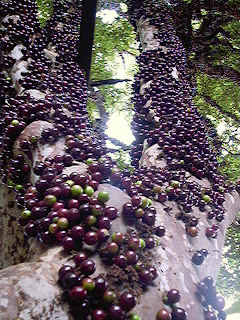 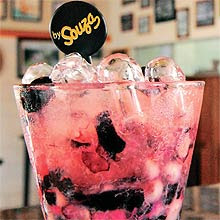 5. Learned WAY more Portuguese swear words than I ever used to know before.

6. Sampled a Brazilian red wine that tasted like sour grape juice, which was proudly presented to me as "the best" in the entire store. Oy. Stick to what you know, Brazil.

7. Tried something called "egg sponge bread," which tasted neither like egg nor sponge. It did taste kind of like cake, though. Probably for the best.

9. Helped throw a Christmas party for kids from a favela in Sao Paulo. We provided the trampolines, ball pits, mini basketball hoop, crayons and food. They provided the laughter, crazed energy, and, in one case, vomit. But overall, it was SUPER fun and rewarding. There's also something wonderfully surreal about seeing your boss dressed as Santa in 90 degree weather, handing out baby dolls and trucks to barefoot kids in tee-shirts and shorts.

10. Went clubbing on many occasions, and managed to escape being, pardon the phrase, face raped by the many overly enthusiastic, drunk Brazilian dudes in tight rugby shirts and designer jeans that appear to populate every balada in this city. Score for me!

11. Accidentally went to a lesbian party and met some really nice girls there. They were SO friendly! Less so once they realized we weren't gay. Still, fun party!

12. Discovered "chopp escuro," the dark version of regular chopp. It is so good - it's creamy but light and refreshing, and isn't bitter like Guiness, even though it looks like it would be. It reminds me of frothy chocolate milk. Alcoholic, frothy, chocolate milk. 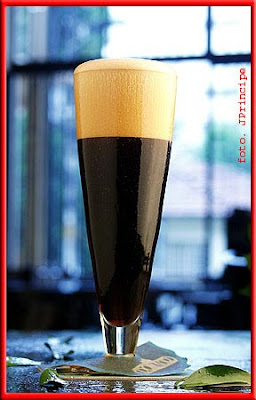 14. Attended a truly lavish Brazilian wedding. One of my coworkers got married and was generous enough to invite the entire office (plus about 350 other people) to his nuptials, which were held at this fabulous event space in the city. There was a full orchestra and choir playing during the ceremony (and a DJ for the reception), a scrumptious dinner and dessert buffet (make your own sundaes, yo!), champagne, a caipirinha bar, and beautiful flowers and lights everywhere. Pretty rad. I love me a good casamento!

15. Attended a number of fancy, schmoozy work events that involved expensive, and, in some cases, bordering on ludicrous, menu items (such as an egg cooked for three days) and large quantities of nice alcohol. I kinda see why people like being corporate lawyers sometimes.

16. Went to a fundraiser at the Canadian Embassy (yay!) and tipsily made the acquaintance of the Canadian ambassador. He seemed underwhelmed.

17. Witnessed the tail-end of a Brazilian presidential campaign, and the two rounds of elections. Watched in bemusement as an illiterate clown was elected to Congress.

I did more than 17 things in the last six months, obviously, but I am going to stop there, so as not to bore all of you to tears as I catalog every coxinha de frango that I ate, every pineapple caipirinha that I swilled (and you all know I would do this). I'll try to blog again before departing for the wintry steppes of Canada, Maine, and D.C. (where I'll be visiting with Al's family and my family). Ate mais!
Posted by Steph at 5:09 PM No comments: