Cockroaches and spiders and Cambodia, oh my!

Hi everyone! I am writing you from lovely Chiang Mai Thailand. Since I last wrote, my life has improved approximately 1000000%, given that I finished the bar exam (and didn't die of exhaustion/hot-tub-borne illnesses) and flew to Thailand to meet up with Al. Vacation has never felt so sweet and well-deserved, let me tell you. Al and I met up in Bangkok and spent a few nights in the swanky Royal Orchid hotel before packing our bags and heading to Cambodia for a few days. In this post, I'll try to convey our Cambodia experience: the good, the bad, and the extremely creepy.

So, our initial plan was to spend three nights in Siem Reap, a town known mainly/only for being the site of the impressive Angkor Wat temple (and a bunch of other temples), now a U.N. World Heritage site. We decided to get to Siem Reap via the capital of Cambodia, Phnom Penh, because one of the airlines has some sketchy monopoly on direct flights from Bangkok to Siem Reap, and Al and I didn't feel like being extorted quite so early in our trip. If only we had known then that trying to avoid being screwed royally (no pun intended) in the Kingdom of Cambodia is like trying not to get your ass grabbed on the subway in Italy: functionally impossible.

Our trip from Phnom Penh to Siem Reap got off on the wrong foot almost immediately, when we were taken by our tuk-tuk (motorcycle rickshaw) driver to The Sketchiest Bus Company in Cambodia/The World, against our wishes, and then charged twice as much for a bus ticket to Siem Reap than the correct price. The "luxury bus" we were put on was hot and smelled kinda weird, and the driver insisted on blasting weird Cambodian television shows that seemed to involve an inordinate amount of shrieking. Did I mention the bus ride was six hours long? It was.

The absolute worst part of the ride was the rest stop that we made halfway between Phnom Penh and Siem Reap, in what can only be described as the armpit of Cambodia. Several disastrous elements collided to make this place particularly putrid: the intense heat, the piles of garbage, the mud, the standing water, the mosquitos, the grubby children relentlessly badgering us to buy pineapple from them, the heaping baskets of fried cockroaches and other unidentifiable insects for sale, the flies circling the plates of rice for which we were forced to fork* over exorbitant amounts of money. Not great.

The kids selling the pineapple were particularly tragic. Obviously their parents are forcing them to engage in this kind of behavior, since it's one of the only feasible ways for them to make money (especially US dollars), but these kids were super aggressive and a bit intimidating. One girl, about ten, would not leave Al alone for the entire half hour or so we were forced to stay at the rest stop. Her spiel went something like this:

Girl: You buy pineapple, you buy from me?

Girl: (whipping out gigantic, live tarantula from somewhere and waving it in Al's face) You want spidaaaah?

Girl: Pineapple? You want some?

At one point, I walked away from Al and the spider girl to try to get around a big puddle of smelly mud, and the girl said to Al, "You want girl?" So not only do the adults have these kids peddling pineapple and spiders, but they have them pimping out prostitutes as well. AWESOME.

It wasn't the best rest stop ever.

We got back on the bus and made it to Siem Reap, where things improved immensely. Siem Reap is a cute, touristy little town with dirt roads lined with bars, restaurants, laundromats, and knick-knack shops (to meet all your Hello Kitty needs!). The entire place runs on tourism surrounding the temples, and there is not much else to do there besides temple gaze, except to sit around eating noodles and drinking Angkor beer, which is a pretty good alternative, really.

Al and I stayed in the uber-backpackery and fun Garden Village Guesthouse, where we spent a considerable amount of time in the rooftop bar, eating noodles and drinking beer. Like I said, it's a pretty big activity there. We went and saw the temples on our second day in town. Perhaps I'll post pictures of the temples eventually, but suffice it to say they are impressive, imposing, and quite unique. We spent most of the day hiking around the temples and taking cheesy pictures among them, and were ferried to and fro by a really nice tuk-tuk guy named Nai, who was one of the only service people in Cambodia who we encountered who didn't try to overcharge us, cheat us, or take us to a crappy restaurant so he could get a commission. We really liked Nai. 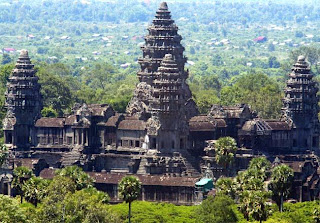 After spending approximately 6 hours in the intensely hot sun and semi-suffocating humidity looking at the temples, we felt pretty templed-out and satisfied with our day, so we returned to the Garden Villa and decided that we'd take off the next morning. Since we had seen all we wanted to see of the temples, it made sense to go back to Phnom Penh to see something different for our last day in Cambodia.

After arriving in Phnom Penh on a cheaper and MUCH less creepy bus, we decided to visit the genocide museum that documents the atrocities committed by the Khmer Rouge regime during their nearly four years in power in Cambodia. The museum is situated in a former high school that was converted into a massive torture center by the Khmer Rouge in the 1970s. Oddly, this is the second former-torture-center-turned-museum that I have visited, since I went to la ESMA in Buenos Aires two summers ago. Perhaps not the most uplifting way to spend an afternoon in either city, but I think as a visitor it's important to try get a sense of the terrible things that people in these places have gone through in recent history, whether it's comfortable or not.

My basic thoughts on the genocide museum were the following: the Khmer Rouge was pure-D evil, the UN, France, and China should be ashamed of themselves for supporting them, and Cambodia seems to continue to suffer immensely almost thirty years after the regime was ousted. After all, during the Khmer Rouge regime 1/4 of Cambodia's population was killed, either executed or starved to death by being forced into the fields to work, since the government couldn't produce enough food to feed its own people after exporting most of its crops. Pretty horrific.

The Khmer Rouge also did things like banning music, perfume, colorful dress, the right to choose one's own mate, family units, money, schools, books, etc. Surviving a regime like that has to have long-lasting effects on the society that suffered through it, I imagine. It's crazy to think that when the Khmer Rouge took over in the 1970s, all of the cities, including Phnom Penh, were evacuated, forcing everyone who survived into the countryside to labor in the fields, as per Pol Pot's great plan to make an entire nation of peasants. It's hard to imagine a city as busy and bustling as Phnom Penh today, with all of its zig-zagging motoboys and tuk-tuks and cars, as being empty and lifeless just over thirty years ago.

Maybe the after-shock of the Khmer Rouge regime explains some of the swindling, hustling vibe that we got from a lot of people we encountered in Cambodia, but who knows. Long story short: I'm very glad I went, but I'm also really glad that I'm in Thailand for the rest of the trip (it's fantastic so far). Also, SUPER glad that the spider girl didn't throw the tarantula in my face. Close call.