Yep, we met Menem the other night. I am talking, of course, about Carlos Saul Menem, ex-Presidente de la Republica Argentina (1989-1999). Please see the most authoritative source on everything, Wikipedia, for more info:
http://en.wikipedia.org/wiki/Carlos_Menem. Or, you can visit Menem's official website, which I'm sure is very balanced and unbiased: http://www.carlosmenem.com/contenidos.asp?seccion=1

As I mentioned in a previous post, officials, ex-officials and other bigwigs in Argentina are apparently keen on meeting law students from Harvard and Yale, regardless of the fact that we are all students of human rights and tend to, um, have strong opinions about certain things. Anyway, the Yale kids (who are here on some sort of exchange program with la UBA) had this meeting set up with Menem and we Harvard mooches tagged along.

The meeting took place at el Hotel Presidente, a place which has apparently been stuck in a special, polyester-covered timewarp since 1976 or so. Menem received us in a little meeting room upstairs, and shook all of our hands as we entered the room. The entire encuentro with Menem was fascinating because the guy is such a politician (and a laywer, which also helps). He skillfully dodged or deflected all of the "pressing questions" we asked about human rights, development, economic reform, and so on. Also, he mixed in a healthy dose of unabashed campaign propaganda, since apparently, as I mentioned above, he is gearing up to run for President in the upcoming elections.

The first question, from one of the Yale kids, had to do with Menem's thoughts on why Kirchner (the current president of Argentina) refers to himself as a Peronist, even though Menem (also a Peronist) and Kirchner have such divergent political views. Menem's answer: "Kirchner NO ES un Peronista. Es un populista de la izquierda. NO es un Peronista." In other words, according to Menem, Kirchner is NOT a Peronist and just claims to be one in order to garner political support, while Menem is a TRUE Peronist. He then outlined some of the views of "real" Peronists, all of which revolved around Christianity (ex: anti-abortion, pro-peace, etc.).

When it was my turn to ask a question, I wanted to hear some of Menem's views on human rights, so I asked, "What are the biggest challenges in the field of human rights facing the current administration, compared to when you were President?" His answer, in a nutshell, was, "I believe in human rights for everyone." The end. Even though he completely side-stepped the question, I didn't feel like pressing him on it, and let Jim, our professor, ask about Menem's pardoning of the former military leaders who had tortured, killed, and disappeared people during the Dirty War. His response, as to whether in retrospect the pardons seemed like a good idea, was that he would absolutely do the same thing again, because the country needed peace and he did not want to re-open old wounds by allowing the on-going prosecutions of the military leaders. Of course, all of us human rights kids sat quietly gritting our teeth at this comment, since the idea that "peace" for Argentina couldn't co-exist with a process of justice is clearly untrue.* But Menem was unapologetic and unwavering in his defense of his own policies and decisions while in office.

During the rest of the encuentro, he also spoke about: immigration (he is all for it since his parents were Syrian immigrants), his political colleagues (he name-dropped a lot and referred to Bush I as "el Papa," which for a minute made me think he was talking about the Pope), and the economic crisis of 2001 (he said his administration didn't help usher in the economic crisis, they fulfilled their mandate and actually improved the Argentine economy though their neoliberal opening policy).

Finally, at the end of the meeting came the moment we had all been waiting for, the photo session! Please see below (and forgive my slightly demented facial expression/head tilt, I was just so excited to be standing next to CSM I couldn't help myself): 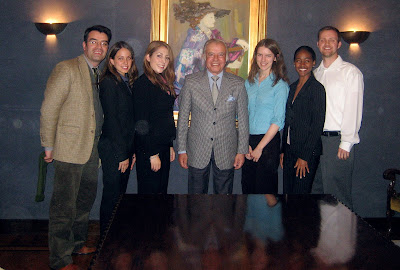 *Incidentally, the pardons that Menem granted to the junta were officially revoked at the end of April of this year. http://news.bbc.co.uk/2/hi/americas/6594127.stm
Posted by Steph at 12:52 PM