Big news in Cuba. Fidel is relinquishing power to his brother, Raul. This is huge, because Fidel has been sick before, has even fallen down and broken bones, but has never even hinted that he would delegate any power to Raul or anyone else in the government. It’s been understood for a while that Raul is Fidel’s heir apparent, but for Fidel to actually designate Raul as the one in charge is a big step, and a clear hint that Fidel is on his last legs.

Some of my friends asked me what I think is going to happen in Cuba now, and whether this is bad news or good news. I don’t pretend to be some sort of expert on Cuba, but I did spend a summer in Havana and have done a fair amount of research on the political situation there, so I guess I can offer my seriously amateur opinion on this.

I think that the fact that Fidel is stepping down is going to have a far-reaching impact in Cuba, but those changes won’t necessarily be positive, and almost certainly won’t lead to Cuba opening towards the United States (or vice versa). Raul, who is currently in charge of the Cuban military, has a history of being militant and authoritarian, is extremely unpopular with Cubans – they call him “la Chinita,” the little Chinese girl, because he is rumored to be gay and has slightly Asian features – and of course wants to preserve the Castro death grip on the Cuban government.

But before we can consider what kind of havoc Raul (and the Cuban military) may wreak on the island, we have to realize that Fidel, despite plenty of wishful thinking in Miami, is still alive and is still very much running the show, even from his sick bed. I read a little article in the Chronicle today in which a Cuban in Havana pointed out that Fidel is still micromanaging, pulling the strings behind the scenes, and Raul knows that. Perhaps that explains why Raul has yet to make a public appearance since Fidel’s announcement. 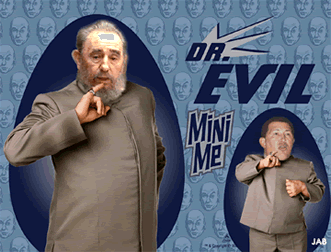 I really wonder what is happening on the ground in Cuba. I know that people are probably extremely anxious and excited, probably torn over whether they want Fidel to die now or not. The thing is, although most Cubans that I met in Havana are very disillusioned with Fidel and his policies, they have come to accept that he has determined their fate as a country for the last 47 years. Whether they agree or disagree, they are so used to him being in charge and managing the day-to-day running of the island that it’s hard for them to imagine anyone else in power.

Plus, the Cuban government is big on fear-mongering – think Fox News times 100 – and over the years has convinced most of the populace that the United States military is waiting to invade the island and annex it. That scenario might have been plausible a century ago, but clearly, invading Cuba and making it the fifty-first state is pretty low on the Bush administration’s agenda. However, a lot of Cubans genuinely believe that they are under constant threat of invasion from the U.S., because the Cuban press reports as much. So, I imagine that Cubans are probably extremely nervous about the immediate future. From their perspective, an unpopular public figure is taking the reins from a man who has been in complete control since 1959, the government is vulnerable, and the U.S. is eager to swoop in and make Cuba into Puerto Rico II.

Stay tuned to see what happens when Raul actually takes over. This should be interesting.
Posted by Steph at 8:56 PM